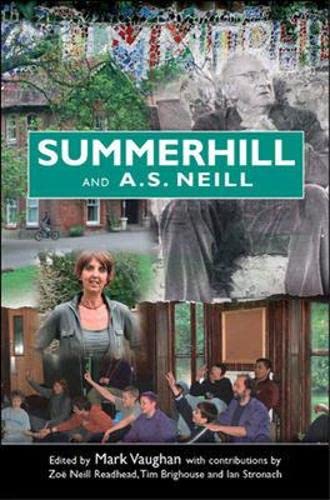 Summerhill and A S Neill by Mark Vaughan

Summerhill is a world-renowned school in England where pupils decide when and what they will learn. Known as 'the oldest children's democracy in the world', Summerhill allows pupils to air their views, propose the school rules and construct future plans for life at the school at the regular school meeting. This book tells the story of the school.

Summerhill and A S Neill by Mark Vaughan

"Summerhill remains unique and different ... its underlying principles and its founding beliefs have informed and influenced generations of teachers in both sectors. It will continue to do so." - Professor Tim Brighouse, Commissioner for London Schools

Summerhill is a world-renowned school in England where pupils decide when and what they will learn. The school was established in 1921 by A. S. Neill, who was named by the Times Educational Supplement in 1999 as one of the twelve most influential educators of the 20th Century. Known as 'the oldest children's democracy in the world', Summerhill allows pupils to air their views, propose new school rules and construct future plans for life at the school at the regular school meeting.

This unique book contains key extracts from Neill's classic text Summerhill, a worldwide bestseller since its publication in 1962, and features contributions from A. S. Neill's daughter, Zoe Neill Readhead, who is the current Principal. She updates the story of the school - larger and more vibrant than ever before - from Neill's death in 1973 to the present day. In his contribution, Tim Brighouse discusses some of the ways in which the influence of Summerhill and A.S. Neill still extends throughout the world today. Ian Stronach, who acted as expert witness during the infamous court case, tells the story of the British Government's attempt to force untenable changes or close down the school in 2001, and the school's subsequent landmark victory in the Royal Courts of Justice.

The book offers a truly inspiring account of a remarkable school, which promotes progressive change in the way pupils are taught and shows how real experiences of democracy can be created for young people. It is essential reading for teachers and trainee teachers, headteachers and school leaders, local education authorities and parents.

Mark Vaughan OBE is Founder and Co-director of the Centre for Studies on Inclusive Education (CSIE). Prior to this he followed a career in journalism and was Deputy News Editor for the TES, where he was the last journalist to interview Neill. He is co-editor, with Gary Thomas, of Inclusive Education: readings and reflections (Open University Press, 2004). Tim Brighouse is Commissioner for London Schools, and was formerly Chief Education Officer for Birmingham and for Oxfordshire, as well as Professor of Education, University of Keele. A. S. Neill was the Founder and Principal of Summerhill School and author of numerous books on education and child-rearing. Zoe Neill Readhead is the daughter of A. S. Neill and now Principal of Summerhill. She has written and spoken on the school widely in the UK and overseas. Ian Stronach is Research Professor of Education at Manchester Metropolitan University.
Preface by Mark Vaughan

`Summerhill School' by A. S. Neill

Inspection and justice: HMI and Summerhill School by Ian Stronach

The A. S. Neill Summerhill Trust

GOR002995534
9780335219131
0335219136
Summerhill and A S Neill by Mark Vaughan
Mark Vaughan
Used - Very Good
Paperback
Open University Press
2006-03-01
208
N/A
Book picture is for illustrative purposes only, actual binding, cover or edition may vary.
This is a used book - there is no escaping the fact it has been read by someone else and it will show signs of wear and previous use. Overall we expect it to be in very good condition, but if you are not entirely satisfied please get in touch with us
Trustpilot