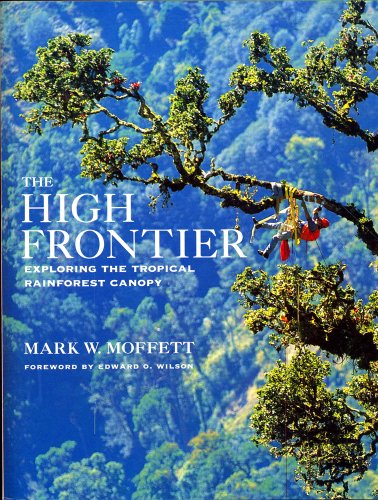 In Stock
$15.49
+10% GST
Loaded with aerial plants and the millions of creatures dependent upon them, tropical tree crowns are the last great ecological frontier. Described as a "world-roving zoologist" by "National Geographic" magazine, Moffett writes of virtually every major active canopy research site.
Very Good
Only 1 left

Loaded with aerial plants and the millions of creatures dependent upon them, tropical tree crowns are the last and greatest ecological frontier. Hundreds of species - earthworms, frogs, lichens, flowers - never descend to earth during their lifetimes. Eight out of ten remain unnamed and unclassified by science. Donning rock-climbing gear to join researchers working 150 feet and more above the ground, Mark Moffett photographed strangler trees in Borneo, giant squirrels in India, and canopy bears in Colombia. He also entered the terrifying world of arboreal spiders and ants, photographing them under extreme magnification. Described as a "world-roving zoologist" by "National Geographic" magazine, Moffett has documented virtually every major active canopy research site. The immediacy of his writing and the intelligence of his photography make the canopy's fantastic architecture and unearthly inhabitants accessible to the general reader. In the tradition of the great 19th-century explorers, he captures the struggles of the individual scientists and the passions that enable them to brave perilous situations in pursuit of their work.

"This book is a tour de force of scientific journalism as well as the visual and literary expression of an experienced and deeply caring naturalist." --E. O. Wilson

"Scientists have only just begun to explore the biology of the tropical rainforest canopy. In "The High Frontier," Mark W. Moffett provides an elegantly written account of the ecology of this aerial continent. The book is packed full with his stunning--and often unusual--photographs of canopy architecture, animals and plants, taken while accompanying tree-climbing researchers working at study sites worldwide." --"Nature"

"Mark Moffett's book is a magnificent exploration of the most biodiverse environment known--the rainforest canopy--supported by the finest colour photographs I have ever seen. Almost a decade has passed since I wrote "The Enchanted Canopy..".Moffett charts the explosion of new discoveries since then and the emergence of a new breed of arboreal naturalists..."The High Frontier" comprises a series of insightful encounters with scientists working in a wide range of disciplines to uncover the secrets of the canopy...The book really comes to life in the examples of how many animals and plants interact. Good journalistic narrative is at all times underpinned with first-hand knowledge and the authority of excellent research...Moffett's book is a visual feast. Some of his photographs are breathtaking...This remarkable book will be another stepping stone on the way to taking canopy science seriously. As Cousteau once predicted research stations under the sea, so I envisage, in the not-too-distant future, permanent research stations in the canopy to study the ocean oflife a mere 100 feet above our heads." --Andrew Mitchell, "Times Higher Education Supplement"

"Moffett presents his personal vision of tropical rain-forest canopy biology, a science in its infancy; it is a product of Moffett's trips to five continents, where he interviewed and worked alongside scores of the tree-climbing biologists who are exploring this unique and rapidly vanishing terrain. The result is a stunning mixture of adventure, nature photography and hard scientific inquiry that ranks with the best work of Jacques Cousteau." --Robert Crawford, "Boston Globe"

"Moffett's own research has often been financed by "The National Geographic," and a single glance at this beautiful, large-format book shows why. He is a superb photographer, able to capture, while dangling from a rope or balanced on a branch, vignettes of life at the top... Moffett says that he hopes people will see, from his book, that these environments are so rich, so valuable, that they will be moved to protect them. I only hope that this is true." --Jonathan Beard, "New Scientist"

Tree climbing for grown-ups; seeing the forest for the trees; a palace of many floors; gardens in the sky; tapping the ground; insects on a rampage; furred and feathered on the top of the world; a floral symphony; treetop games between plants and animals; a science nears maturity.

GOR001429909
The High Frontier: Exploring the Tropical Rainforest Canopy by Mark W. Moffett
Mark W. Moffett
Used - Very Good
Paperback
Harvard University Press
1994-04-05
192
0674390393
9780674390393
N/A
Book picture is for illustrative purposes only, actual binding, cover or edition may vary.
This is a used book - there is no escaping the fact it has been read by someone else and it will show signs of wear and previous use. Overall we expect it to be in very good condition, but if you are not entirely satisfied please get in touch with us.