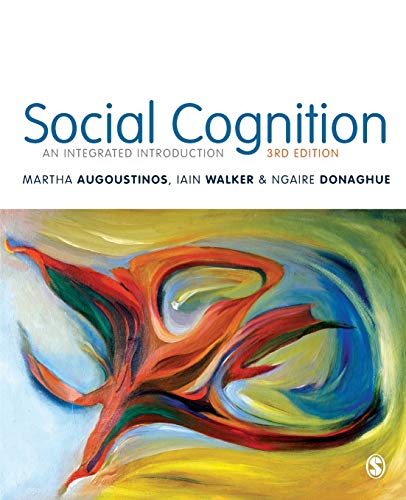 The Third Edition of this much celebrated textbook continues to focus on the four major and influential perspectives in contemporary social psychology - social cognition, social identity, social representations, and discursive psychology. A foundational chapter presenting an account of these perspectives is then followed by topic-based chapters from the point of view of each perspective in turn, discussing commonalities and divergences across each of them.

Key Features of the Third Edition:

- An extended conclusion covers the ways in which the different approaches of the field intersect as well as a general discussion of the direction in which the field is moving.

Social Cognition: An Integrated Introduction is an integrative, holistic textbook that will enhance the reader's understanding of social cognition and of each of the topical issues considered. It remains a key textbook for psychology students, particularly those on courses in social psychology and social cognition.

'It's very good news that Martha Augoustinos and her co-authors have brought out a new, revised edition of Social Cognition. It really is an excellent, broad-ranging book, whose clear discussion of differing approaches should appeal to undergraduates of psychology. But make no mistake: this new edition, just like the previous ones, is so much more than a textbook. It contains an important, underlying argument about the social nature of thinking.' -- Michael Billig

'This is a remarkably sophisticated and insightful examination of social cognitive, social identity, social representations, and discursive approaches to social psychological phenomena. The core principles of each perspective are clearly explained with an engaging style that is a pleasure to read, and deep insights into how humans come to understand their social world can be found on every page. As the authors remind us, social psychological ideas have the potential to change the world. This book is beautifully written, conveys the excitement and possibilities of the discipline, and is thought provoking throughout.'

'This scholarly, broad-ranging and generous book remains the best introduction to the field of social cognition. It offers a truly `integrative' approach, attempting to bring together work from a diverse range of traditions of social and cognitive psychology and into dialogue researchers who should talk to one another more, but so often don't.'

GOR008215985
Social Cognition: An Integrated Introduction by Martha Augoustinos
Martha Augoustinos
Used - Very Good
Paperback
SAGE Publications Ltd
2014-11-30
386
1446210529
9781446210529
N/A
Book picture is for illustrative purposes only, actual binding, cover or edition may vary.
This is a used book - there is no escaping the fact it has been read by someone else and it will show signs of wear and previous use. Overall we expect it to be in very good condition, but if you are not entirely satisfied please get in touch with us.