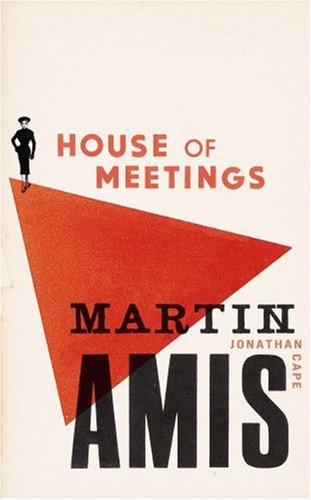 House of Meetings
by Martin Amis

Used Price
$23.49
inc. GST
Free Shipping in Australia
Tells the story of a triangular romance: two brothers fall in love with the same girl, a nineteen-year-old Jewess, in Moscow, which is poised for pogrom in the gap between the war and the death of Stalin. Both brothers are arrested, and their rivalry slowly complicates itself over a decade in the slave camp above the Arctic Circle.
Reviews:
Trustpilot
Very Good

House of Meetings by Martin Amis

There were conjugal visits in the slave camps of the USSR. Valiant women would travel continental distances, over weeks and months, in the hope of spending a night, with their particular enemy of the people, in the House of Meetings. The consequences of these liaisons were almost invariably tragic. "House of Meetings" is about one such liaison. It is a triangular romance: two brothers fall in love with the same girl, a nineteen-year-old Jewess, in Moscow, which is poised for pogrom in the gap between the war and the death of Stalin. Both brothers are arrested, and their rivalry slowly complicates itself over a decade in the slave camp above the Arctic Circle. As one brother, finally, writes to the other, 'You know what happened to us? It wasn't just a compendium of very bad experiences. That was general and standard-issue. That was off the rack. What I'm referring to is the destiny that is made to measure. Something was designed inside us, blending with what was already there. For each of us, in different ways and settings, the worst of all possible outcomes.' A short novel of great depth and richness, "House of Meetings" finds Martin Amis at the height of his powers, in new and remarkably fertile fictional territory.

" "House of Meetings" is a powerful, unrelenting and deeply affecting performance: a bullet train of a novel that barrels deep into the heart of darkness that was the Soviet gulag and takes the reader along on an unnerving journey into one of history's most harrowing chapters . . . It is a story about fraternal love and resentment, but more important, it is a story about the consequences of survival, and about the connection between public and private betrayals and the human costs of a totalitarian state's policies of internment . . . [Amis] has produced what is arguably his most powerful book yet."
--Michiko Kakutani, "New York Times"
" Amis has said that he's never been to Russia, but you'd never know that by reading "House of Meetings," which stares into that country's soul deeply enough to convince anyone who's ever read its novels, at least . . . The grim story builds with a Dostoyevskian sense of doom and a Nabokovian dark wit, [about] a man who's done terrible things and is able to look at them philosophically--a perfect character for a fearless writer like Amis." --Keir Graff, "Booklist, "starred review
" Inside the provocative, philosophical, acerbic Amis, there has long seemed to be a Russian novelist straining to break out. Here, then, is Amis's contemporary version of a classic Russian novel. ["House of Meetings"] sustains the narrative momentum of a mystery [and] confirms Amis's mastery of tone and the ambiguities of character . . . A novel that doesn't read like any other, ranking as this renowned British author's best. " --"Kirkus, "starred review
Acclaim from Britain:
" A slender, moving novel, streakedwith dark comedy, [and] unmistakably Amis' s best novel since "London Fields.""
-- Robert Macfarlane, "The" "Sunday Times"
" "House of Meetings" is a singular, unimpeachable triumph, as powerful as J. M. Coetzee' s "Disgrace" . . . [It is] a novel that not so much makes the spine tingle as the heart race at its passion and richness."
-- "The Economist"
" [A] compact tour de force . . . "House of Meetings "is more than a love story; it is about envy, ethics, chaos, resistance, violence, solipsism and confession . . . Amis has produced a memorable novel and a memorable protagonist."
-- Toby Lichtig, "The Observer"
" Magnificent . . . Amis has absorbed the horror of history and the agony of Russia in a wise, gut-wrenching story that sighs and breathes with an eloquently outraged sorrow . . . The tone is pitch-perfect; regretful, bitter, edgy, brilliantly shaped by laconic asides, humour as black as coal . . . It is a human story [in which] history and life do battle, [and] Amis directs this book with equal measures of intensity and inspiration." -- Eileen Battersby, "The Irish Times"
" "[House of Meetings]" has a cumulative power and resonates with many reflections about the course of individual destiny in a profoundly cruel universe . . . about the nature of memory and personal responsibility, and the way we are all enslaved by life' s infinite moral complexities."
-- Douglas Kennedy, "The Times"
" A slight novel in size only, "House of Meetings" provides an impressively full and frightening look into Stalin' s labour camps . . . Painful, trenchant, and elegantly written . . . Serious in the best sense, its subject matter pleasingly unpredictable . . . I read it as slowly as I could [and] savoured every page."
-- Lionel Shriver, "The Daily Telegraph"
Praise for Martin Amis:
" Amis [is] one of the very few living masters of the dying art of satire. . . . As ever, he is brilliant on the patch of London turf he has made his own- he could probably write a thousand-page novel and never be boring. . . . [W]hat really sets Amis apart is his ability to find humour in the darkest of places."
-- "The Gazette" (Montreal)
" Amis can throw words around like nobody else."
-- "NOW" (Toronto)
" Pick up anything by British writer Martin Amis and you know you' re in for a twisted romp that could take you anywhere and usually to places your mom warned you about. . . . [He is] as satirical as Swift."
-- "The Hamilton Spectator"

GOR001291472
House of Meetings by Martin Amis
Martin Amis
Used - Very Good
Hardback
Vintage Publishing
2006-09-18
208
0224076094
9780224076098
N/A
Book picture is for illustrative purposes only, actual binding, cover or edition may vary.
This is a used book - there is no escaping the fact it has been read by someone else and it will show signs of wear and previous use. Overall we expect it to be in very good condition, but if you are not entirely satisfied please get in touch with us.