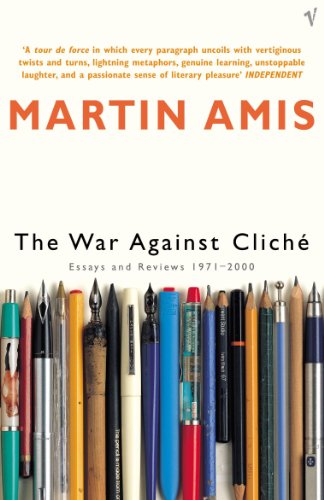 The War Against Cliche
by Martin Amis

The War Against Cliche Summary

The War Against Cliche: Essays and Reviews 1971-2000 by Martin Amis

The War Against Cliche Reviews

"A tour de force in which every paragraph uncoils with vertiginous twists and turns, lightning metaphors, genuine learning, unstoppable laughter, and a passionate sense of literary pleasure" * Independent *
"Amis's gifts - vigilance, wit, energy of language... A collection that reaffirms him as the suavest and funniest critic of his generation" * Mail on Sunday *
"We have here a literary critic of startling power... Often being right and being funny are, in this book, aspects of the same sentence... Amis is the best practitioner-critic of our day - just what Pritchett was in his prime..." * London Review of Books *
"[Written] with intelligence and ardor and panache... Speaks not just to a lifetime of reading but also to a fascination with individual writers mature" * New York Times *
"Brilliant prose... [Amis] proselytizes for talent by demonstrating it, by doing it... He is a master" * New York Times Book Review *

GOR001399329
The War Against Cliche: Essays and Reviews 1971-2000 by Martin Amis
Martin Amis
Used - Very Good
Paperback
Vintage Publishing
2000-11-04
528
0099422220
9780099422228
N/A
Book picture is for illustrative purposes only, actual binding, cover or edition may vary.
This is a used book - there is no escaping the fact it has been read by someone else and it will show signs of wear and previous use. Overall we expect it to be in very good condition, but if you are not entirely satisfied please get in touch with us.