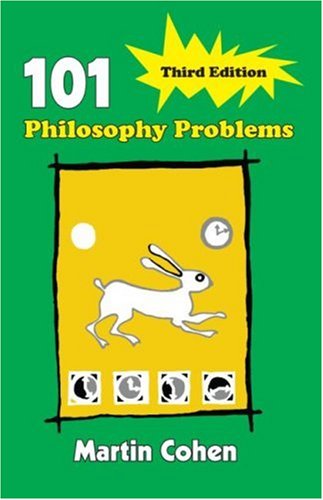 Does Farmer Field really know his prize cow, Daisy, is in the field? When is an unexpected exam not wholly unexpected? Are all bachelors (really) unmarried? Martin Cohen's bestselling 101 Philosophy Problems is a witty and engaging introduction to philosophy, covering classical as well as contemporary problems from the fields of medical ethics, modern physics and artificial intelligence.

For the third edition, many of the problems have been revised and there are several brand new ones, including Lewis Carroll's problem of people who don't eat lentils and Poincare's problem of the gaseous people whose measurements keep changing.

With an updated glossary of helpful terms and possible solutions to the problems at the end of the book, 101 Philosophy Problems is essential reading for anyone coming to philosophy for the first time.

'You can't just read philosophy, you've got to actually do it ... 101 Philosophy Problems is an all too rare example of a book that does just that.' - The Philosophers' Magazine

'Introduces philosophy in a novel way, with helpful tools for leading students into the world of philosophy.' - The Times Higher Education Supplement

Martin Cohen is editor of The Philosopher, the journal of the Philosophical Society in England, lecturer and a successful author and journalist. His bestselling 101 Ethical Dilemmas, second edition, is also published by Routledge (2007).

GOR010862095
101 Philosophy Problems by Martin Cohen
Martin Cohen
Used - Like New
Paperback
Taylor & Francis Ltd
2007-02-06
256
0415404029
9780415404020
N/A
Book picture is for illustrative purposes only, actual binding, cover or edition may vary.
The book has been read, but looks new. The book cover has no visible wear, and the dust jacket is included if applicable. No missing or damaged pages, no tears, possible very minimal creasing, no underlining or highlighting of text, and no writing in the margins.