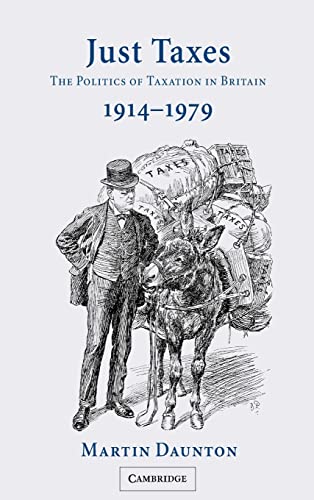 Just Taxes: The Politics of Taxation in Britain, 1914-1979 by Martin Daunton (University of Cambridge)

In 1914, taxation was about 10 per cent of GNP; by 1979, taxes had risen to almost half of the total national income, and contributed to the rise of Thatcher. Martin Daunton continues the story begun in Trusting Leviathan, offering an analysis of the politics of acceptance of huge tax rises after the First World War and asks why it did not provoke the same levels of discontent in Britain as it did on the continent. He further questions why acceptance gave way to hostility at the end of this period. Daunton views taxes as the central driving force for equity or efficiency. As such he provides a detailed discussion of their potential in providing revenue for the state, and their use in shaping the social structure and influencing economic growth. Just Taxes places taxation in its proper place, at the centre of modern British history.

'Daunton's fine study ... makes an important contribution to understanding the background to the political economy of Thatcherism.' Roger Middleton, The Times Higher Education Supplement
'Just Taxes is a book rich in detail and argument that requires careful reading: Daunton's lucid writing makes that possible.' Juliet Gardiner, History Today
'... an effective and sobering account ... a very important and surprisingly accessible book, in which Daunton explains complex issues very well.' Andrew Thorpe, History
'Just Taxes: The Politics of Taxation in Britain, 1914-1979 is a pioneering, uncompromisingly high-minded survey that, in conjunction with its predecessor volume Trusting Leviathan: The Politics of Taxation in Britain, 1799-1914 goes a long way towards fulfilling Daunton's aim of at last placing taxation squarely at the centre of modern British history.' The Times Literary Supplement
'This is a book worth buying ...' The Economic History Review
'... a great achievement in terms of scholarship and lively interpretation ... should indeed inform contemporary debates on teh impact of national taxation.' Parliaments, Estates and Representation
'Daunton has drawn upon a wide range of archival and printed sources to produce a coherent and accessible account of a complex subject ... Just taxes is as important for the study of British history in the twentieth century as trusting Leviathan is for the nineteenth.' The Historical Journal

About Martin Daunton (University of Cambridge)

MARTIN DAUNTON, FBA, is Fellow of Churchill College and Professor of Economic History in the University of Cambridge.

GOR006452545
Just Taxes: The Politics of Taxation in Britain, 1914-1979 by Martin Daunton (University of Cambridge)
Martin Daunton (University of Cambridge)
Used - Very Good
Hardback
Cambridge University Press
2002-10-17
424
0521814006
9780521814003
N/A
Book picture is for illustrative purposes only, actual binding, cover or edition may vary.
This is a used book - there is no escaping the fact it has been read by someone else and it will show signs of wear and previous use. Overall we expect it to be in very good condition, but if you are not entirely satisfied please get in touch with us.