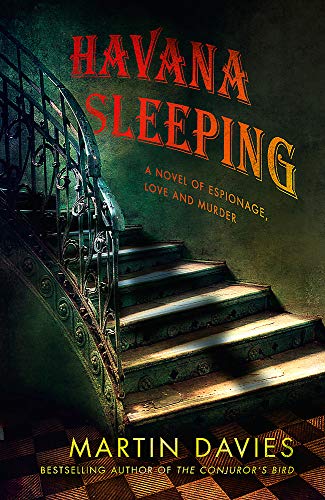 Murder, slavery and intrigue confront a British diplomat posted to Cuba in the 1850s.

Havana in the 1850s is a city as dangerous as it is exotic. The murder of a humble night watchman at the British Consulate seems to worry neither the Consul nor the police.

But one person cared for the old man. The enigmatic courtesan Leonarda will not rest until she understands the mystery of his death.

In wintry England, George Backhouse is plucked from obscurity in the Foreign Office and given an unexpected promotion. His task: to travel to Cuba and take a stand against the illegal slave trade still flourishing there.

But Havana is a tinderbox of intrigue. As the great powers of the region conspire against each other with increasing ruthlessness for control of the island, Backhouse comes to see that the most innocent of actions could spark a devastating war.

To protect their interests, the powers-that-be in Whitehall are prepared to turn a blind eye to many things. Leonarda will not.

But what of George Backhouse?

As Martin builds his usual high standard of atmosphere, we travel from fascination to fear . . . HAVANA SLEEPING is totally unforgettable. * The Bookbag *
A compelling and highly readable narrative . . . Davies proves to be a master of the evocative. * We Love This Book on THE YEAR AFTER *
The storytelling is masterly. * Independent on Sunday on THE UNICORN ROAD *
So readable and enjoyable and multilayered. * Boyd Hilton, Radio Five Live on THE UNICORN ROAD *
A beautifully evoked narrative from the past. * Guardian on THE CONJUROR'S BIRD *
A pacy confection of history, mystery and romance . . . a most engaging and unusual novel. * The Times on THE CONJUROR'S BIRD *
A clever and unusual espionage thriller * The Sunday Times *

Martin Davies grew up in North West England. All his writing is done in cafes, on buses or on tube trains, and an aversion to laptops means that he always works in longhand. He has travelled widely, including in the Middle East and India, and substantial parts of THE UNICORN ROAD were written while travelling through Sicily. He works as a consultant in the broadcasting industry.

GOR006558997
Havana Sleeping by Martin Davies
Martin Davies
Used - Very Good
Hardback
Hodder & Stoughton
2014-08-12
416
0340980451
9780340980453
Short-listed for CWA Endeavour Historical Dagger 2015
Book picture is for illustrative purposes only, actual binding, cover or edition may vary.
This is a used book - there is no escaping the fact it has been read by someone else and it will show signs of wear and previous use. Overall we expect it to be in very good condition, but if you are not entirely satisfied please get in touch with us.
Trustpilot