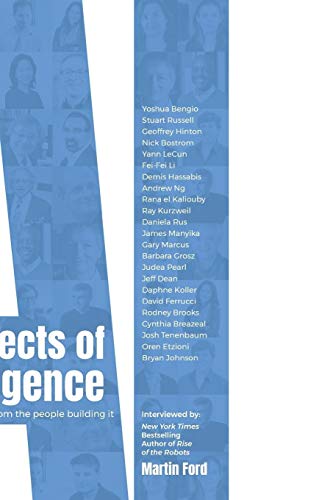 Architects of Intelligence by Martin Ford

Architects of Intelligence: The truth about AI from the people building it by Martin Ford

How will AI evolve and what major innovations are on the horizon? What will its impact be on the job market, economy, and society? What is the path toward human-level machine intelligence? What should we be concerned about as artificial intelligence advances?

Architects of Intelligence contains a series of in-depth, one-to-one interviews where New York Times bestselling author, Martin Ford, uncovers the truth behind these questions from some of the brightest minds in the Artificial Intelligence community.

Martin Ford is a prominent futurist, and author of Financial Times Business Book of the Year, Rise of the Robots. He speaks at conferences and companies around the world on what AI and automation might mean for the future.

Martin Ford is a futurist and the author of two books: The New York Times Bestselling Rise of the Robots: Technology and the Threat of a Jobless Future (winner of the 2015 Financial Times/McKinsey Business Book of the Year Award and translated into more than 20 languages) and The Lights in the Tunnel: Automation, Accelerating Technology and the Economy of the Future, as well as the founder of a Silicon Valley-based software development firm. His TED Talk on the impact of AI and robotics on the economy and society, given on the main stage at the 2017 TED Conference, has been viewed more than 2 million times. Martin is also the consulting artificial intelligence expert for the new "Rise of the Robots Index" from Societe Generale, underlying the Lyxor Robotics & AI ETF, which is focused specifically on investing in companies that will be significant participants in the AI and robotics revolution. He holds a computer engineering degree from the University of Michigan, Ann Arbor and a graduate business degree from the University of California, Los Angeles. He has written about future technology and its implications for publications including The New York Times, Fortune, Forbes, The Atlantic, The Washington Post, Harvard Business Review, The Guardian, and The Financial Times. He has also appeared on numerous radio and television shows, including NPR, CNBC, CNN, MSNBC and PBS. Martin is a frequent keynote speaker on the subject of accelerating progress in robotics and artificial intelligence-and what these advances mean for the economy, job market and society of the future. Martin continues to focus on entrepreneurship and is actively engaged as a board member and investor at Genesis Systems, a startup company that has developed a revolutionary atmospheric water generation (AWG) technology. Genesis will soon deploy automated, self-powered systems that will generate water directly from the air at industrial scale in the world's most arid regions.
GOR010066530
9781789131512
1789131510
Architects of Intelligence: The truth about AI from the people building it by Martin Ford
Martin Ford
Used - Very Good
Paperback
Packt Publishing Limited
2018-11-23
554
N/A
Book picture is for illustrative purposes only, actual binding, cover or edition may vary.
This is a used book - there is no escaping the fact it has been read by someone else and it will show signs of wear and previous use. Overall we expect it to be in very good condition, but if you are not entirely satisfied please get in touch with us
Trustpilot