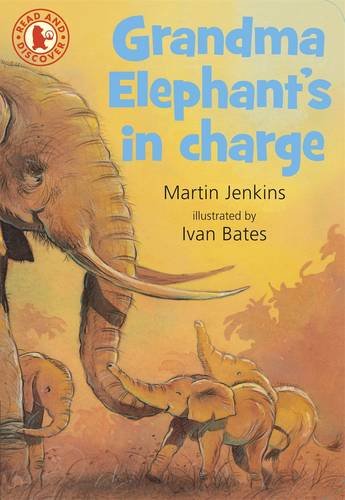 Used Price
$11.99
inc. GST
Free Shipping in Australia
Elephants are big - and the biggest and most important elephant of all is Grandma. She's in charge!
Reviews:
Trustpilot
Very Good

One of a new series of books, Read and Discover, designed to encourage children to learn about the world as they learn to read. Elephants are big - and the biggest and most important elephant of all is Grandma. She's in charge!

A mix of factual information and compelling story, Grandma Elephant's in Charge is a great choice for the picture book lover in your family. * Curledupkids.com *
Martin Jenkins incorporates all sorts of interesting facts about elephants. * Growing Up in Santa Cruz *

Martin Jenkins is a children's author whose work often centres around animals and the environment.A conservation biologist by trade, Martin worked full-time for ten years for World Conservation Monitoring Centre, writing about a range of conservation issues.Since 1990 he has worked freelance for organisations such as WWF and a number of UN bodies concerned with conservation and the environment.He became involved with children's books when he was asked to advise on Walker Books' Animals at Risk series. He has written several titles, including Emperor's Egg, winner of the Times Junior Information Book of the Year Award and Fly Traps! Plants that Bite Back, which was shortlisted for the same award. He has also retold Gulliver's Travels, winner of the Kate Greenaway Medal with Don Quixote. Ivan Bates is an author and illustrator of children's books. His works include Just You and Me, Do Like a Duck Does!

GOR002294575
Grandma Elephant's in Charge by Martin Jenkins
Martin Jenkins
Read and Discover
Used - Very Good
Paperback
Walker Books Ltd
2010-06-01
40
1406318590
9781406318593
N/A
Book picture is for illustrative purposes only, actual binding, cover or edition may vary.
This is a used book - there is no escaping the fact it has been read by someone else and it will show signs of wear and previous use. Overall we expect it to be in very good condition, but if you are not entirely satisfied please get in touch with us.