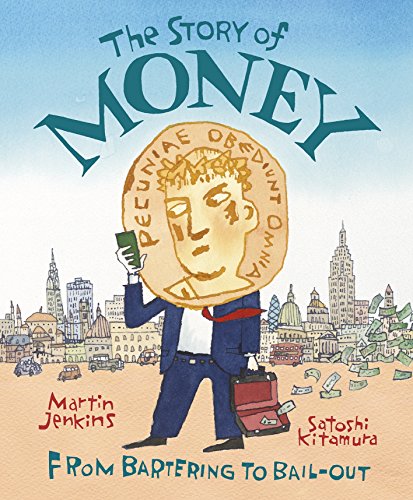 The Story of Money
by Martin Jenkins

The Story of Money Summary

The Story of Money by Martin Jenkins

A funny, philosophical book about the universal subject of money.

In the Yap Islands in the South Pacific it can be a stone with a hole in the middle. It can be a string of shells, a bundle of cloth or a copper slab. It's the stuff that makes the world go round. That doesn't grow on trees. That can't buy you love, apparently.In this fascinating and thought-provoking book, Martin Jenkins explores the history of money from its earliest beginnings to the electronic banking of today. Along the way we learn about hunter gatherers, barter, clay tablets, goat swapping, precious metals, hard bargains, IOUs, interest, coins, Romans, taxes, inflation, paper money, currencies and exchange rates. Satoshi Kitamura's quirky, satirical drawings perfectly compliment the dry humour of the text and in the end we are reminded that money only exists because we believe in it.

The Story of Money Reviews

A quirky, philosophical look at the history of money . . . aimed at nine-plus readers, with typically witty illustrations from Kitamura. Very topical and currently a gap in the non-fiction market * The Bookseller *
A quirky look at the history of money and what it means * The Bookseller *
Is this book about the evolution of money worth it? Yes. Kerching! With a few reservations. Kitamura's illustrations have become a byword for class and Jenkins has a history of writing decent non-fiction for kids. . . The story of the introduction of paper money (in China around 1000CE) is compelling. The pros and cons or sharing a currency are explained clearly (attention all mini-Farages!). At the end, there is an attempt to neutralise the whizzy economics with a moral lesson: calling Baby Fred the Shreds, if you think money is the grooviest thing, think again, Jenkins says. -- Alex O'Connell * The Times *
A funny, philosophical book about the subject of money -- Fiona Noble * Bookseller Children's Guide *
This intriguing book will fascinate adult and child alike with its gently humorous - sometimes tongue-in-cheek - approach to something we all find essential. . . All interspersed with quirky anecdotes and fun-filled illustrations that really bring the topic to life in a memorable way. * Parents in Touch *
Totally absorbing and brilliantly illustrated book. * angels and urchins *
Engrossing and Original. * Books for Keeps *
Fascinating . . . lucid and absorbing. . . Martin Jenkins uses humour and enough quirky facts to keep the readers interest without descending into silliness. Highly recommended. * The School Librarian *
Exciting and fascinating stuff! Clear and concise, this reads extremely well thanks to a light, conversational tone and quirky illustrations that usefully break up the layout. * Children's Books Ireland Recommended Read *

Martin Jenkins has written many ground-breaking non-fiction books for Walker: Can We Save the Tiger?, Ape and The Time Book to name just a few. He has won several awards for his writing including the 1998 TES Information Book of the Year Junior Award for The Emperor's Egg, and he is the reteller of Jonathan Swift's Gulliver, illustrated by Chris Riddell, which won the 2005 Kate Greenaway Medal. He lives in Cambridge.

Satoshi Kitamura won the 1993 Mother Goose Award for the most exciting newcomer to children's book illustration for Angry Arthur. His books for Walker include The Carnival of the Animals, Stone Age Boy and Pumpkin Grumpkin edited by John Agard and Grace Nichols. Satoshi lives in Japan.

GOR006078058
The Story of Money by Martin Jenkins
Martin Jenkins
Used - Very Good
Hardback
Walker Books Ltd
2014-07-22
64
1406324582
9781406324587
N/A
Book picture is for illustrative purposes only, actual binding, cover or edition may vary.
This is a used book - there is no escaping the fact it has been read by someone else and it will show signs of wear and previous use. Overall we expect it to be in very good condition, but if you are not entirely satisfied please get in touch with us.