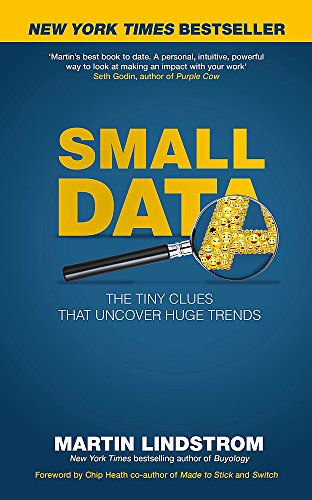 The New York Times Bestseller named one of the "Most Important Books of 2016" by Inc, and a Forbes 2016 "Must Read Business Book"

Small Data presents a behind-the-scenes look at what it takes to create global brands and reveals surprising and counter-intuitive truths about who we are and what connects us as humans.

The New York Times Bestseller named one of the "Most Important Books of 2016" by Inc, and a Forbes 2016 "Must Read Business Book"

'If you love 'Bones' and 'CSI', this book is your kind of candy' Paco Underhill, author of Why We Buy

'Martin's best book to date. A personal, intuitive, powerful way to look at making an impact with your work' Seth Godin, author of Purple Cow

Martin Lindstrom, one of Time Magazine's 100 Most Influential People in The World and a modern-day Sherlock Holmes, harnesses the power of "small data" in his quest to discover the next big thing.

In an era where many believe Big Data has rendered human perception and observation 'old-school' or passe, Martin Lindstrom shows that mining and matching technological data with up-close psychological insight creates the ultimate snapshot of who we really are and what we really want. He works like a modern-day Sherlock Holmes, accumulating small clues - the progressively weaker handshakes of Millenials, a notable global decrease in the use of facial powder, a change in how younger consumers approach eating ice cream cones - to help solve a stunningly diverse array of challenges. In Switzerland, a stuffed teddy bear in a teenage girl's bedroom helped revolutionise 1,000 stores - spread across twenty countries - for one of Europe's largest fashion retailers. In Dubai, a distinctive bracelet strung with pearls helped Jenny Craig offset its declining membership in the United States and increase loyalty by 159% in only one year. In China, the look of a car dashboard led to the design of the iRobot, or Roomba, floor cleaner - a great success story.

SMALL DATA combines armchair travel with forensic psychology in an interlocking series of international clue-gathering detective stories. It shows Lindstrom using his proprietary CLUES Framework - where big data is merely one part of the overall puzzle - to get radically close to consumers and come up with the counter-intuitive insights that have in some cases helped transform entire industries.

SMALL DATA presents a rare behind-the-scenes look at what it takes to create global brands, and reveals surprising and counter-intuitive truths about what connects us all as humans.

Such research borrows from anthropology and ethnography. Like its academic cousins, it provokes some interesting reflections about enduring human difference in an increasingly homogenised world. -- Andrew Hill * The Telegraph *

Martin Lindstrom is a consultant to a Who's Who of brand-leading companies. In 2009, TIME Magazine recognized him as among the Top 100 Most Influential People in the World. He is the author of the international bestseller, BUYOLOGY, and five other books on branding and consumer behaviour. He is featured regularly in almost every major publication in the US and worldwide. Lindstrom has appeared more than twenty times on NBC's Today Show as well as in Morgan Spurlock's THE GREATEST MOVIE EVER SOLD and on AMERICA'S NEXT TOP MODEL. He is the author of the bestselling BUYOLOGY and most recently, BRANDWASHED.

GOR007741455
Small Data: The Tiny Clues That Uncover Huge Trends by Martin Lindstrom
Martin Lindstrom
Used - Good
Paperback
John Murray Press
2016-03-08
256
1473634067
9781473634060
N/A
Book picture is for illustrative purposes only, actual binding, cover or edition may vary.
The book has been read but remains in clean condition. All pages are intact and the cover is intact. Some minor wear to the spine.