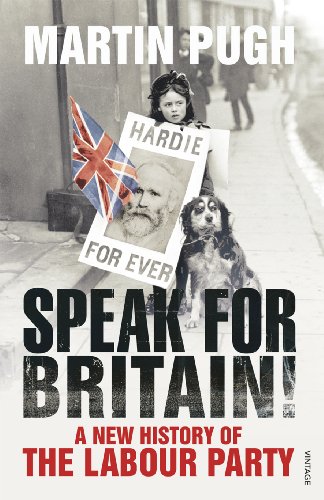 Speak for Britain!
by Martin Pugh

Out of Stock
$24.49
inc. GST
Written at a critical juncture in the history of the Labour Party, Speak for Britain!
Good
Only 0 left

Speak for Britain!: A New History of the Labour Party by Martin Pugh

Written at a critical juncture in the history of the Labour Party, Speak for Britain! is a thought-provoking and highly original interpretation of the party's evolution, from its trade union origins to its status as a national governing party. It charts Labour's rise to power by re-examining the impact of the First World War, the general strike of 1926, Labour's breakthrough at the 1945 general election, the influence of post-war affluence and consumerism on the fortunes and character of the party, and its revival after the defeats of the Thatcher era. Controversially, Pugh argues that Labour never entirely succeeded in becoming 'the party of the working class'; many of its influential recruits - from Oswald Mosley to Hugh Gaitskell to Tony Blair - were from middle and upper-class Conservative backgrounds and rather than converting the working class to socialism, Labour adapted itself to local and regional political cultures.

"Excellent and provocative new history" -- John Campbell * Mail on Sunday *
"An admirable model of how political history should be written" * Times Literary Supplement *
"Overall the book is... spliced with incisive arguments and interspersed with challenging verdicts on Labour's evolution... This ambitious Labour history could well become compulsory reading for future party leaders" -- John Shepherd * History Today *
"A startlingly revisionist book... The most provocative and clear-eyed history of the party yet... It is a tribute to Pugh's scholarship that almost everybody will learn something new from this thoughtful book" -- Dominic Sandbrook * Sunday Times *
"A stimulating survey" -- Kenneth O'Morgan * Literary Review *

Martin Pugh was Professor of British History at Newcastle University and Research Professor in History at Liverpool John Moores University. He is a Fellow of the Royal Historical Society, a member of the advisory panel of the BBC History Magazine, and the author of over twelve books on nineteenth- and twentieth-century history. He lives in Northumberland.

GOR004536523
Speak for Britain!: A New History of the Labour Party by Martin Pugh
Martin Pugh
Used - Good
Paperback
Vintage Publishing
2011-02-05
480
0099520788
9780099520788
N/A
Book picture is for illustrative purposes only, actual binding, cover or edition may vary.
The book has been read but remains in clean condition. All pages are intact and the cover is intact. Some minor wear to the spine.