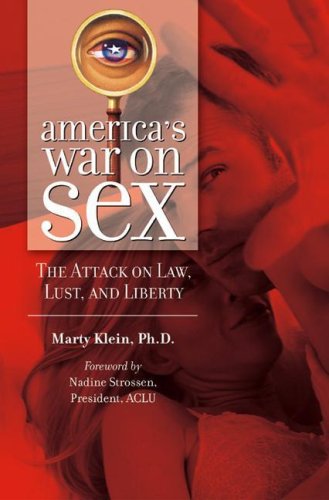 Out of Stock
$58.99
inc. GST
With examples ripped from today's headlines, with brutal honesty and a wicked sense of humor, Marty Klein names names, challenges political hypocrisy, and shows the financial connections between government and conservative religious groups that are systematically taking away your rights.
Good
Only 0 left

America's War on Sex: The Attack on Law, Lust and Liberty by Marty Klein

President George W. Bush says that, In our free society, people have the right to choose how they live their lives. But our government and the Religious Right are successfully censoring what you read, hear, and see; limiting your access to contraception; legislating good moral values; and brainwashing your kids that God hates premarital sex. The Right has politicized private life, expanding the zone of public sexuality. This guarantees policies that will worsen social problems and increase personal anxiety, providing proof that sexuality is fundamentally negative-so citizens demand more sex-negative policies. With examples ripped from today's headlines, with brutal honesty and a wicked sense of humor, Marty Klein names names, challenges political hypocrisy, and shows the financial connections between government and conservative religious groups that are systematically taking away your rights. And, in the process, changing American society-forever.

"Klein's careful work torpedoing the erotophobic war against sex had to be done, and he did it well." - Journal of Sex Research
"Although Klein does not provide an easy fix to the vexing problems posed by erotophobes, crusaders, the Christian-American Taliban, or religious terrorists, terms not guaranteed to assuage the opposition, he does offer sufficient examples of the war on our fundamental liberties to energize even the most laid-back of his readers. This book will infuriate people on both ends of the political spectrum, if for different reasons. That is a rare accomplishment, and one that deserves to be experienced. If America's War on Sex helps to begin to redress the balance between individual freedom of expression and the society's responsibility to protect the well-being of its citizenry, it will have made a major contribution to life in this land of the free." - PsycCRITIQUES
"Adding to his already impressive roster of works on human sexuality, renowned author, sex educator, and therapist Marty Klein has surpassed all previous efforts with this incisive exploration of the sexual battleground that our country has become." - The Gay & Lesbian Review
"The book is a great resource for anyone trying to come to grips with society's turmoil over sexuality as well as for anyone interested in understanding their own sexuality in a social and political context. If knowledge is power, readers will feel quite empowered after reading Klein's book." - www.curledup.com

Marty Klein is a Licensed Marriage and Family Therapist and Certified Sex Therapist who has provided some 30,000 sessions for couples and singles across his 25 years in practice. His entire career has been aimed toward a single set of goals: telling the truth about sexuality, helping people feel sexually adequate and powerful, and supporting the healthy sexual expression and exploration of women and men. Marty Klein's previous five books have been acclaimed by media from USA Today to The California Therapist and the Playboy Advisor, and are available in nine languages. A tireless speaker, Klein has given over 600 keynote speeches, training programs and popular lectures across North America and countries including Russia, Israel, Morocco, Latvia, Austria, Turkey and Croatia, the last a country where he is affectionately know as The Father of Sex Therapy.

GOR010239862
America's War on Sex: The Attack on Law, Lust and Liberty by Marty Klein
Marty Klein
Used - Good
Hardback
ABC-CLIO
2006-08-30
232
027598785X
9780275987855
Winner of Best Professional Sexuality Book of 2006 AASECT--the American Association of Sex 2006 (United States)
Book picture is for illustrative purposes only, actual binding, cover or edition may vary.
The book has been read but remains in clean condition. All pages are intact and the cover is intact. Some minor wear to the spine.