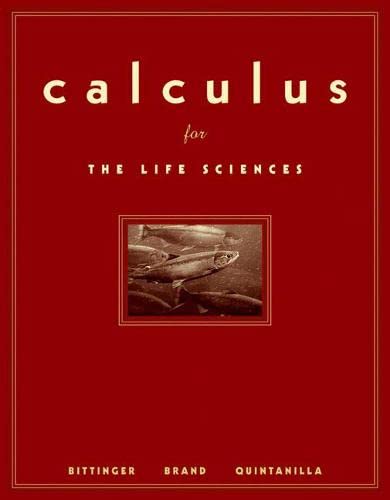 Calculus for the Life Sciences
by Marvin L. Bittinger

Calculus for the Life Sciences Summary

Calculus for the Life Sciences by Marvin L. Bittinger

Based on the best-selling Calculus and Its Applications by Marv Bittinger, this new text is appropriate for a two-semester calculus course for life science majors. With four new chapters and two new co-authors, Calculus for the Life Sciences continues the Bittinger reputation as one of the most student-oriented and clearly written Applied Calculus texts available. The exercises and examples have been substantially updated to include additional relevant life science applications and current topics.

Marvin Bittinger For over thirty years Professor Marvin L. Bittinger has been teaching math at the university level. Since 1968 he has been employed as a professor of mathematics education at Indiana University - Purdue University at Indianapolis. Professor Bittinger has authored 159 publications on topics ranging from Basic Mathematics to Algebra and Trigonometry to Brief Calculus. He received his BA in Mathematics from Manchester College in 1963 and his PhD in Mathematics Education from Purdue University in 1968. Special honors include being Distinguished Visiting Professor at the United States Air Force Academy and being elected to the Manchester College Board of Trustees from 1992 to 1999. His hobbies include hiking, baseball, golf, and bowling and he enjoys membership in the Professional Bowler's Association and the Society for the Advancement of Baseball Research.

Professor Bittinger has also had the privilege of speaking at a recent mathematics convention giving a lecture entitled, Baseball and Mathematics. In addition, he also has an interest in philosophy and theology, in particular, apologetics. Professor Bittinger currently lives in Carmel, Indiana with his wife Elaine. He has two grown and married sons, Lowell and Chris, and three grandchildren.

Dr. Brand is a member of the Mathematical Association of America and the American Mathematical Society. Outside of mathematics, his interests include woodworking and carpentry. He is a founding board member and current board president of Habitat for Humanity of Denton County. He lives in Denton, Texas with his wife Shari. He also has two grown daughters.

John A. Quintanilla is an Associate Professor of Mathematics at the University of North Texas in Denton, Texas, where he has taught since 1996. He received both his BS and MS in Mathematics from Stanford University in 1992, and he received his PhD in Civil of Engineering and Operations Research from Princeton University in 1997. He has authored or co-authored 18 refereed articles that have appeared in the scientific literature.

His outside interests include golf, volleyball, softball, and Bible study. He lives in Denton, Texas with his wife Sandra and their daughter Sarah.

1.5 Trigonometric Functions and the Unit Circle

2.1 Limits and Continuity: Numerically and Graphically

3.1 Using the First Derivatives to Find Maximum and Minimum Values and Sketch Graphs

4.5 The Derivatives of ax and logax

6.3 Finding a Matrix Inverse and Determinant

7.4 An Application: The Method of Least Squares

Appendix A: Review of Basic Algebra

Areas for a Standard Normal Distribution

GOR009780911
Calculus for the Life Sciences by Marvin L. Bittinger
Marvin L. Bittinger
Used - Very Good
Hardback
Pearson Education (US)
2005-10-18
832
0321279352
9780321279354
N/A
Book picture is for illustrative purposes only, actual binding, cover or edition may vary.
This is a used book - there is no escaping the fact it has been read by someone else and it will show signs of wear and previous use. Overall we expect it to be in very good condition, but if you are not entirely satisfied please get in touch with us.