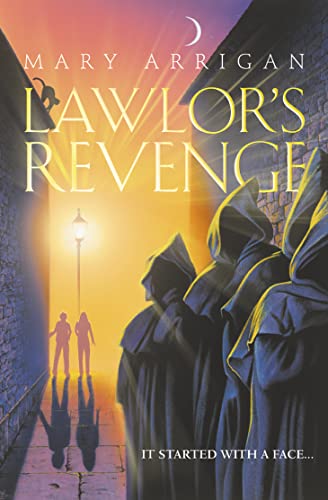 A third chilling time-slip novel from award winning Irish author, set in Ireland with flashbacks to the 19th Century penal colony Port Arthur, in Tasmania as a restless spirit returns to clear his father's name.

A third chilling time-slip novel from award winning Irish author, set in Ireland with flashbacks to the 19th Century penal colony Port Arthur, in Tasmania as a restless spirit returns to clear his father's name.

Set in contemporary Ireland, Bron a teenage girl forms a relationship with an elderly eccentric musician, Mrs Caffrey, who is introducing Bron to the delights of the opera Orpheus in the Underworld. Mrs Caffrey sees faces of bearded men in her bathroom mat...Eventually just one face remains and it appears to be pleading for help.

Mrs Caffrey is a descendant of an Irishman, Patrick Lawlor, who was falsely accused and convicted of a crime and sent to the penal colony Port Arthur in Tasmania.

Through Mrs Caffrey, Bron teams up with a thirteen-year-old ghost, Alby, Lawlor's son, and they set out to clear his father's name. Parallels with Orpheus in the Underworld are drawn as Alby and Bron go back in time to the mid 1800s and scenes from the penal colony in Port Arthur are interspersed with Alby and Bron's desperate attempts to change the course of history. But Lawlor himself is not the only restless spirit. The man who caused his original conviction is also around and is determine to stop the youngsters in their task.

Mary Arrigan delivers her third terrifying novel with style. Her mix of lively dialogue and humour weaves throughout the horror and this is another immensely exciting and chilling read.

Mary Arrigan studied art in Dublin and Florence and taught the subject in secondary schools in Ireland for many years. She left teaching to write and illustrate children's books. She has won The Sunday Times Short Story Award, the Hennessy Literary Award, and has been shortlisted twice for Bisto Awards. In 1997 she won the International Youth Library [Munich] White Ravens title for The Dwellers Beneath.

GOR009830949
Lawlor's Revenge by Mary Arrigan
Mary Arrigan
Used - Very Good
Paperback
HarperCollins Publishers
2002-09-02
192
0007137656
9780007137657
N/A
Book picture is for illustrative purposes only, actual binding, cover or edition may vary.
The book has been read but remains in clean condition. All pages are intact and the cover is intact. Some minor wear to the spine.