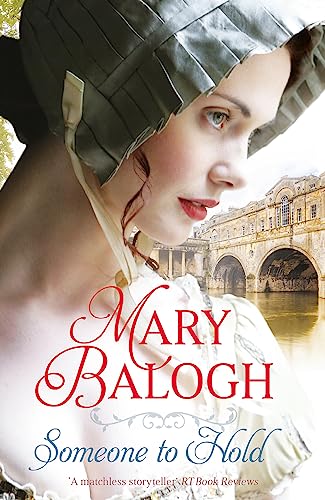 Someone to Hold
by Mary Balogh

Someone to Hold Summary

Someone to Hold by Mary Balogh

A reversal of fortune befalls a young woman in the second Westcott novel from the New York Times bestselling author of Only a Kiss and Someone to Love.

Humphrey Wescott, Earl of Riverdale, has died, leaving behind a fortune and a scandalous secret that will forever alter the lives of his family - sending one daughter on a journey of self-discovery.

With her parents' marriage declared bigamous, Camille Westcott is now illegitimate and without a title. Looking to eschew the trappings of her old life, she leaves London to teach at the Bath orphanage where her newly discovered half-sister lived. But even as she settles in, she must sit for a portrait commissioned by her grandmother and endure an artist who riles her every nerve.

An art teacher at the orphanage that was once his home, Joel Cunningham has been hired to paint the portrait of the haughty new teacher. But as Camille poses for Joel, their mutual contempt soon turns to desire. And it is only the bond between them that will allow them to weather the rough storm that lies ahead...

'A grand mistress of the genre' Romantic Times

Customer Reviews - Someone to Hold

Someone to Hold Reviews

Mary Balogh's ability to create interesting characters and plotlines shines through, and her great strength in exploring the emotions and motivations of those characters is much evidence. * Allaboutromance.com *
Balogh pens an enchanting Cinderella story, touching readers with the sincerity of the characters and the mature depth of their relationships... the novel gifts the readers with an understanding of both character and plot that an accomplished writer, like Balogh, can carry off with aplomb. * RT Book Reviews *
Ms Balogh is a veritable treasure, a matchless storyteller who makes our hearts melt with delight. * Romantic Times *
Balogh is truly a find. * Publishers Weekly *
A grand mistress of the genre. * Romantic Times *
A new Mary Balogh book is a gift every woman should give herself. * Teresa Medeiros *
Ms Balogh is a favourite of readers everywhere! * Affaire de Coeur *
[Mary Balogh] has established reputation for unsurpassed originality and excellence. * Romantic Times *

Mary Balogh is a New York Times bestselling author. A former teacher, she grew up in Wales and now lives in Canada. Visit her at www.marybalogh.com

GOR008748688
Someone to Hold by Mary Balogh
Mary Balogh
Westcott
Used - Well Read
Paperback
Little, Brown Book Group
2017-02-07
400
0349413657
9780349413655
N/A
Book picture is for illustrative purposes only, actual binding, cover or edition may vary.
This is a used book. We do our best to provide good quality books for you to read, but there is no escaping the fact that it has been owned and read by someone else previously. Therefore it will show signs of wear and may be an ex library book.