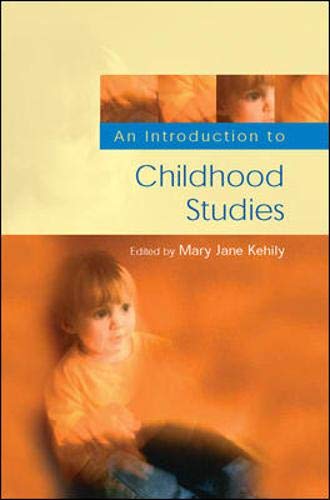 In Stock
$10.49
+10% GST
Addresses questions such as: What is childhood? How can childhood be understood and studied? How do our views of childhood shape the ways in which children are treated?
Very Good Good Well Read
12 in stock

"Some of the best scholars in childhood studies have contributed to this volume, providing insightful overviews and, in some cases, interesting new lines of argument. Clustered around historical, sociocultural, and policy perspectives on childhood, the essays highlight both the pleasures and the challenges of interdisciplinary research. An engaging and readable pathway into a flourishing field of research."Barrie Thorne, University of California, BerkeleyEducationalists and social scientists are increasingly interested in childhood as a distinct social category, and Childhood Studies is now a recognised area of research and analysis. This book brings together the key themes of Childhood Studies in a broad and accessible introduction for students and practitioners working in this field.

Contributors examine childhood from historical, socio-cultural and policy perspectives. Each chapter is written by an expert who looks at a different aspect of childhood, including historical representations of childhood; the construction of childhood in children's literature; childhood and sexuality; the sociology of childhood; developmental psychology; the changing nature of children's relationships with the electronic media; children's rights; and children and the law.

This key textbook is designed for students following Childhood Studies courses, as well as for courses in child psychology, children's literature, the sociology of youth and childhood, cultural studies, social policy and anthropology.

Dr Mary Jane Kehily is Senior Lecturer at the Centre for Childhood, Development and Learning at the Open University, UK. She has a background in cultural studies and education and has research interests in childhood and youth, particularly in the areas of gender, sexuality, narrative and identity, drug use and popular culture.

Chapter 1 The historical construction of childhood
Author: Diana GittinsThis chapter traces the development of adult ideas about childhood and considers the ways in which historical representations of childhood come into being through the dominant discourses of a particular time and space. The chapter draws upon a range of historical sources to unpack our common assumptions about `the child' and `childhood' and explore the meanings and values that are commonly attributed to them. The chapter argues that while there continue to exist substantial differences and inequalities that affect real children in material and often harmful ways, `the child' also acts as an important cultural construct at both a symbolic and psychological level. It is in the blurring and overlapping of adults' multiple and diverse notions of what `the child' is and should be that confusions and contradictions arise.

Chapter 3 Innocence and experience: an historical approach to childhood and sexuality
Authors: Mary Jane Kehily and Heather Montgomery.Notions of childhood are frequently premised upon an idea of innocence in which childhood is seen as a time of protection from the dangerous and potentially corrupting adult world. This chapter explores the theme of innocence and lost innocence particularly in relation to historical constructions of the child. Cross cultural examples of childrearing practices, children's sexual awareness and their involvement in the domain of the sexual are drawn upon to illustrate the many ways in which children may be seen as knowing and experienced rather than innocent. Finally, the chapter suggests that the concept of childhood is contested and struggled over in ways that position children as inherently good or potentially evil.

SECTION TWO: SOCIO-CULTURAL APPROACHES
Chapter 4 The Sociology of ChildhoodAuthor: Chris Jenks.This chapter outlines and discusses sociological approaches to the concept of childhood and will consider the social implications of these for the ways in which children are perceived and positioned in contemporary societies. The social sciences have previously handled childhood either through theories of socialisation or through developmental psychology - both of which have led to children being considered as a natural rather than a social phenomenon. This chapter offers a greater appreciation of the social factors that make up our knowledge of children and childhood. It gives a critical framework through which to understand private attitudes and public policy in relation to the child, viewing childhood from a social constructionist perspective.

Chapter 6 New media, new childhoods?
Author: David Buckingham.This chapter focuses on the changing nature of children's relationships with the electronic media. It draws upon research about 'old' media such as television, while focusing specifically on the implications of new digital media such as computer games and the Internet. The chapter discusses how concerns about the dangers of new media (for example in relation to sex and violence) reflect broader anxieties about the changing nature and scope of childhood. However, it also challenges the more celebratory tone that is increasingly adopted in this field, arguing that we need to acknowledge the inequalities and frustrations that characterise children's uses of new media as well as the opportunities they represent. In doing so, it draws on ongoing research about game cultures and chat rooms, as well as work that is exploring the potential of new media as a means of cultural expression among children.

SECTION THREE: POLICY PERSPECTIVES
Chapter 7: Promoting better childhoodsAuthor: Wendy Stainton RogersThis chapter explores the diverse - and often conflicting - views about what constitutes `a good childhood' and how children can be offered `better childhoods', and then examines how these impact upon social policies towards and service provision for children. The chapter is framed around three main discourses: promoting children's needs, children's rights, and children's quality of life. It is illustrated with examples at different levels - local, national and international. The chapter picks up on a number of themes from other chapters, to show how different perceptions of `childhood' lead to different strategies towards their welfare, and will include coverage of how children, themselves, have become engaged as social actors within these debates and actions.

Chapter 8 Children's Rights: international policy and lived practice
Author: Rachel Burr.This chapter introduces the reader to the United Nations Convention on the Rights of the Child (UNCRC) and provide students with background information regarding its almost world wide ratification. Here the impact of the Convention is examined in the light of socio-cultural influences upon childhood experiences. It is argued that the UNCRC represents a particular model of childhood informed by Western thinking that has implications for children in non Western contexts. Evidence is drawn upon to show that, as presently constituted, this child-focused international human rights law is fundamentally grounded in individual rights and therefore remains unable to accommodate societies in which communal rights are the norm. In its critique of the Convention this chapter draws upon ethnographic material from different parts of the world, and particularly Asia, to show that because the self as `I' is not universally recognised the Convention itself holds little meaning for many societies. In this context the Convention will be examined as a tool for international organisations to introduce the child rights agenda across the globe. Examples of implementation are drawn upon to show that some of the articles are culturally irrelevant and therefore have little meaning in certain contexts. Issues of child rights are examined from the perspective of children themselves to show that top-down attempts to give children autonomy are not necessarily having their intended impact.

Chapter 9: Law and Children/Law and Childhood
Author: Daniel Monk.Perceptions of law and the legal profession frequently paint a picture of law as complex, rather dry and, depending on the circumstances, a burden or a source of protection. The aim of this chapter is to dispel these commonplace assumptions. In particular the chapter attempts to demonstrate that the law relating to children is not simply a code of behaviour or rule-book that tells us what children can do or how adults (parents and authorities) should behave towards them. Rather, it can be seen as an increasingly significant site for the construction and legitimisation of contemporary knowledge about childhood. In other words law is not simply functional but productive. This approach requires that we think of law and read law as a contingent cultural and social text. This chapter will introduce the reader to some of the key works and underlying principles of critical, feminist and socio-legal perspectives on childhood. The chapter does not deal with them in an abstract or purely theoretical fashion but applies them through an examination of three distinct and currently controversial areas of law:
*Child Sexuality
*Domestic Violence and Contact Disputes in Family Law Proceedings
*Juvenile Justice and the Criminal Child
A common question and theme underlying all three case studies is the extent to which law listens to the voice of the children concerned and acknowledges their individual subjectivities. The chapter highlights this point and explores the extent to which children can be understood to be `rights holders' and the degree to which the increased focus and acceptance of a `children's rights' discourse has and is able to challenge the objectification of children by law. The three case studies have been chosen to i ncorporate a wide range of legal categories (public, private family, criminal, education and health law) and a variety of legal sources (statute, case law, codes of practice). The chapter does not claim or attempt to provide a comprehensive coverage of child law but will demonstrate that there is not one uniformed coherent image of the child in law but, rather, that law engages in dialogue with a range of other discourses and tells many different stories of childhood.

Conclusion: The Future of Childhood?
Mary Jane Kehily and Wendy Stainton RogersThis final chapter reviews and discusses the main themes as developed by the different authors in previous chapters. Based upon a reading of the chapters in this book, the concluding chapter also looks ahead to consider the future of childhood both as a subject of study and a social category.

GOR001679628
Childhood Studies by Mary Jane Kehily
Mary Jane Kehily
Used - Very Good
Paperback
Open University Press
2004-06-16
216
0335212670
9780335212675
N/A
Book picture is for illustrative purposes only, actual binding, cover or edition may vary.
This is a used book - there is no escaping the fact it has been read by someone else and it will show signs of wear and previous use. Overall we expect it to be in very good condition, but if you are not entirely satisfied please get in touch with us.