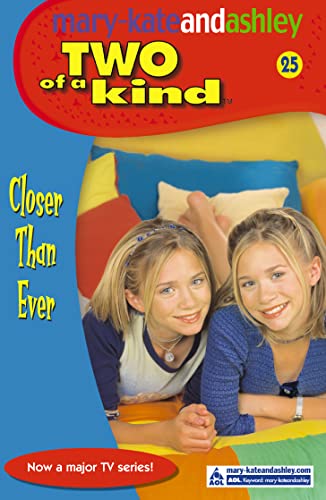 Closer Than Ever
by Mary-Kate Olsen

Closer Than Ever Summary

Closer Than Ever (Two Of A Kind, Book 25) by Mary-Kate Olsen

Mary-Kate and Ashley have never been roommates at White Oak - until now! But once Ashley moves in, she drives Mary-Kate crazy! Mary-Kate makes a bet with her friends that she can turn Ashley into the perfect roomie in just one week.

Meanwhile, Ashley is making her apple cider recipe for the school harvest festival. But after the boys and girls get a taste of the cider, they all start to fall for one another. Could it be that Ashley's supersecret ingredient turned the cider into... a love potion?

Closer Than Ever Reviews

GOR002610212
Closer Than Ever (Two Of A Kind, Book 25) by Mary-Kate Olsen
Mary-Kate Olsen
Two Of A Kind
Used - Very Good
Paperback
HarperCollins Publishers
2004-04-05
112
0007158815
9780007158812
N/A
Book picture is for illustrative purposes only, actual binding, cover or edition may vary.
This is a used book - there is no escaping the fact it has been read by someone else and it will show signs of wear and previous use. Overall we expect it to be in very good condition, but if you are not entirely satisfied please get in touch with us.