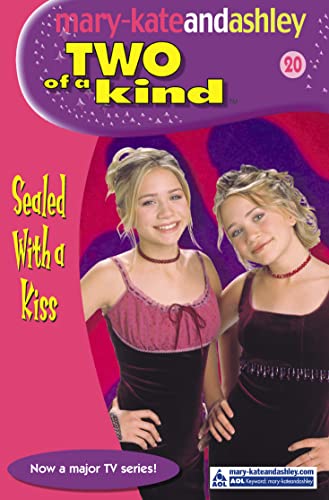 Sealed With A Kiss
by Mary-Kate Olsen

Sealed With A Kiss Summary

Sealed With A Kiss (Two Of A Kind, Book 20) by Mary-Kate Olsen

Mary-Kate and Ashley can't wait to go home for winter break. But they wind up stuck in a Harrington dorm instead. To make matters worse, the headmaster thinks that doing endless chores is more fun than singing carols and decking the halls!

But things start to look up when the girls meet a new boy with a romantic holiday secret...

Sealed With A Kiss Reviews

GOR001974450
Sealed With A Kiss (Two Of A Kind, Book 20) by Mary-Kate Olsen
Mary-Kate Olsen
Two Of A Kind
Used - Very Good
Paperback
HarperCollins Publishers
2003-07-07
112
000714461X
9780007144617
N/A
Book picture is for illustrative purposes only, actual binding, cover or edition may vary.
This is a used book - there is no escaping the fact it has been read by someone else and it will show signs of wear and previous use. Overall we expect it to be in very good condition, but if you are not entirely satisfied please get in touch with us.