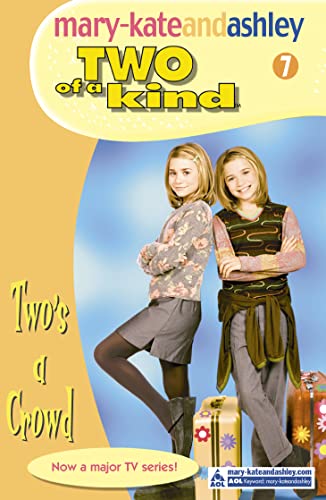 Two's a Crowd
by Mary-Kate Olsen

Mary-Kate thought her twin sister Ashley would be her best friend forever. But now Ashley has a new best friend! Ashley's spending all her time with Nicole, and Mary-Kate feels totally left out. She has to get rid of Nicole - and she knows just how to do it.

She pretends to be Ashley and tells Nicole their friendship is over. It works. Everything's back to normal - until Ashley finds out!

By Judy Katschke.
From the teleplay by Chip Keyes, David Hoge and Dan Cross.
From the series created by Robert Griffard and Howard Adler.

"The twins are the epitome of middle-class southern California: pretty, polite and inspirational. The image appeals to a vast number of young girls."
John Harlow, The Sunday Times (January 27, 2002)

GOR002681754
Two's a Crowd (Two Of A Kind, Book 7) by Mary-Kate Olsen
Mary-Kate Olsen
Two Of A Kind
Used - Very Good
Paperback
HarperCollins Publishers
2002-07-01
112
0007144741
9780007144747
N/A
Book picture is for illustrative purposes only, actual binding, cover or edition may vary.
This is a used book - there is no escaping the fact it has been read by someone else and it will show signs of wear and previous use. Overall we expect it to be in very good condition, but if you are not entirely satisfied please get in touch with us.