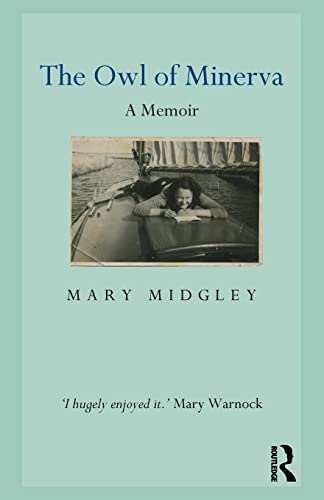 Owl of Minerva
by Mary Midgley

Out of Stock
$38.99
inc. GST
Mary Midgley is one of the UK's foremost moral philosophers. This book presents her story in this moving account of friendships found and lost, bitter philosophical battles and of a profound love of teaching. It sheds light on Mary's friends, her moral philosophy and her meetings with major philosophers, including Wittgenstein and Isaiah Berlin.
Like New
Only 0 left

Owl of Minerva: A Memoir by Mary Midgley

One of the UK's foremost living moral philosophers, Mary Midgley recounts her remarkable story in this elegiac and moving account of friendships found and lost, bitter philosophical battles and of a profound love of teaching.

In spite of her many books and public profile, little is known about Mary's life. Part of a famous generation of women philosophers that includes Elizabeth Anscombe, Philippa Foot, Mary Warnock and Iris Murdoch, Midgley tells us in vivid and humorous fashion how they cut a swathe through the arid landscape of 1950s British Philosophy, writing and arguing about the grand themes of character, beauty and the meaning of rudeness.

The mother of three children, her journey is one of a woman who during the 1950s and 1960s was fighting to combine a professional career with raising a family. In startling contrast to many of the academic stars of her generation, we learn that Midgley nearly became a novelist and started writing philosophy only when in her fifties, suggesting that Minerva's owl really does fly at dusk.

Charting the highs and lows of philosophy and academia in Britain, this publication sheds light on Mary's close friends, her moral philosophy and her meetings with major philosophers, including Wittgenstein and Isaiah Berlin.

'Not only a superbly lively account of being educated in the first half of the twentieth century, but a portrait of one of the most utterly sensible, accessible and humane philosophers of our age.' - Rowan Williams (Archbishop), Times Literary Supplement

'Her memoir is a warm and reassuring account of the value of civilised life and of the confidence it can provide.' - The Scotsman

'This memoir contains humour as well as wit and is a joy to read.' - The Tablet

'A warm and humorous memoir by one of the UKs leading moral philosophers. Many young students sense well enough that in the present darkness, articulate and well-informed understanding of their scientific civilization, its values and politics is necessary. They need their Midgleys.' - Simon Blackburn, The New Scientist

Mary Midgley was born in London in 1919. She is one of the most renowned moral philosophers of her generation and the author of many books, including Beast and Man, Wickedness and The Myths We Live By. She has taken part in many broadcast events, including The Moral Maze and Woman's Hour.

GOR010397999
Owl of Minerva: A Memoir by Mary Midgley
Mary Midgley
Used - Like New
Paperback
Taylor & Francis Ltd
2004-12-16
232
0415371392
9780415371391
N/A
Book picture is for illustrative purposes only, actual binding, cover or edition may vary.
The book has been read, but looks new. The book cover has no visible wear, and the dust jacket is included if applicable. No missing or damaged pages, no tears, possible very minimal creasing, no underlining or highlighting of text, and no writing in the margins.