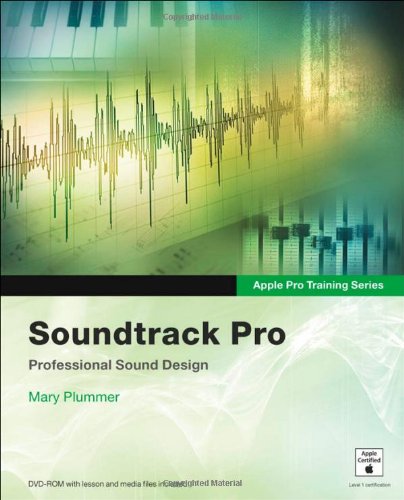 In Stock
$20.99
+10% GST
Soundtrack Pro, Apple's sound design software, is a member of the Final Cut Pro Studio digital video suite. This title provides a self-paced course in various aspects of Soundtrack Pro. It guides you through the secrets of editing, repairing, mixing, and arranging multi-track audio files, as well as how to create original soundtracks, and more.
Very Good
Only 1 left

Soundtrack Pro, Apple's exciting sound design software, is the newest member of the Final Cut Pro Studio digital video suite-And whether you're musically impaired or musically gifted, the Soundtrack Pro guide will help you get up to speed quickly. In this Apple-certified book/DVD combo, readers will find a complete, self-paced course in all aspects of Soundtrack Pro. Author Mary Plummer guides you through the secrets of editing, repairing, mixing, and arranging multi-track audio files, as well as how to create original soundtracks, score to video, add effects, and more. Step-by-step exercises and lesson files will have readers taking advantage of Soundtrack's thousands of audio loops to create perfectly synched scores in no time. Also included are dozens of advanced sound editing tips for professional users who want to take their video, DVD, and Web projects to the next level.

Mary Plummer is a professional musician, composer, and video editor who's edited music videos, documentaries, and independent feature films. An Apple Certified Trainer, she is the co-owner of In Vision Digital and Media Arts Inc., an Apple Authorized Training Center located at Universal Studios in Orlando, Florida. She is also the author of several books, including Apple Pro Training Series: Soundtrack and Apple Pro Training Series: Getting Started with Motion.

GOR003229841
Apple Pro Training Series: Soundtrack Pro by Mary Plummer
Mary Plummer
Apple Pro Training
Used - Very Good
Hardback
Pearson Education (US)
2005-08-31
528
0321357574
9780321357571
N/A
Book picture is for illustrative purposes only, actual binding, cover or edition may vary.
This is a used book - there is no escaping the fact it has been read by someone else and it will show signs of wear and previous use. Overall we expect it to be in very good condition, but if you are not entirely satisfied please get in touch with us.