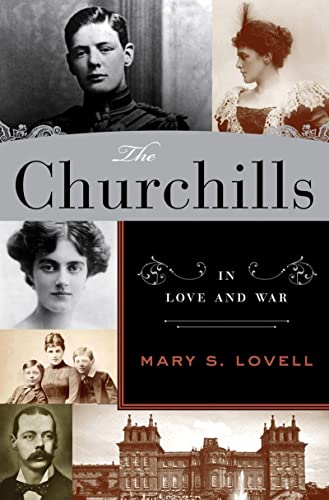 The Churchills
by Mary S. Lovell

The Churchills: In Love and War by Mary S. Lovell

The first Duke of Marlborough (1650-1722) was a soldier of such genius that a lavish palace, Blenheim, was built to honor his triumphs. Succeeding generations of Churchills sometimes achieved distinction but also included profligates and womanizers, and were saddled with the ruinous upkeep of Blenheim. The family fortunes were revived in the nineteenth century by the huge dowries of New York society beauties Jennie Jerome (Winston's mother) and Consuelo Vanderbilt (wife to Winston's cousin).

Mary S. Lovell brilliantly recounts the triumphant political and military campaigns, the construction of great houses, the domestic tragedies, and the happy marriage of Winston to Clementine Hosier set against the disastrous unions of most of his family, which ended in venereal disease, papal annulment, clinical depression, and adultery.

The Churchills were an extraordinary family: ambitious, impecunious, impulsive, brave, and arrogant. Winston-recently voted "The Greatest Briton"-dominates them all. His failures and triumphs are revealed in the context of a poignant and sometimes tragic private life.

Mary S. Lovell's best-selling biographies include Straight on Till Morning (Beryl Markham) and The Sisters (the Mitford family). She lives in England.

GOR008411205
The Churchills: In Love and War by Mary S. Lovell
Mary S. Lovell
Used - Like New
Hardback
Unknown
0
0393062309
9780393062304
N/A
Book picture is for illustrative purposes only, actual binding, cover or edition may vary.
The book has been read, but looks new. The book cover has no visible wear, and the dust jacket is included if applicable. No missing or damaged pages, no tears, possible very minimal creasing, no underlining or highlighting of text, and no writing in the margins.