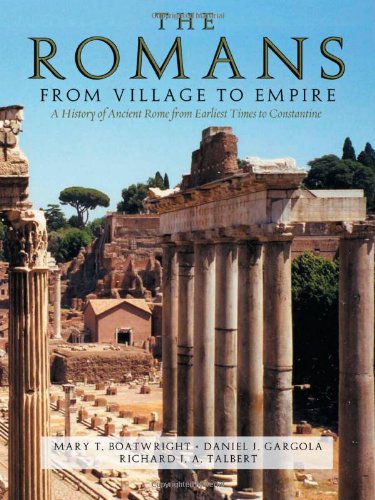 In Stock
$92.99
inc. GST
Introduces ancient Rome offering a concise understanding of its political, social, and cultural history. This book traces Rome's remarkable evolution from monarchy, to republic, to one-man rule by an emperor whose power stretched from Scotland to Iraq, and far up the Nile valley.
Very Good
Only 2 left

How did a single village community in the Italian peninsula eventually become one of the most powerful imperial powers the world has ever known? In The Romans: From Village to Empire, Mary T. Boatwright, Daniel Gargola, and Richard J.A. Talbert explore this question as they guide readers through a comprehensive sweep of Roman history, ranging from the prehistoric settlements to the age of Constantine.


Vividly written and accessible, The Romans traces Rome's remarkable evolution from village, to monarchy, to republic, and eventually to one-man rule by an emperor whose power at its peak stretched from Scotland to Iraq and the Nile Valley. Firmly grounded in ancient literary and material sources, the book describes and analyzes major political and military landmarks, from the Punic Wars, to Caesar's conquest of Gaul and his crossing of the Rubicon, to the victory of Octavian over Mark Antony, and to Constantine's adoption of Christianity. It also introduces such captivating individuals as Hannibal, Mithridates, Pompey, Cicero, Cleopatra, Augustus, Livia, Nero, Marcus Aurelius, and Shapur. The authors cover issues that still confront modern states worldwide, including warfare, empire building, consensus forging, and political fragmentation. They also integrate glimpses of many aspects of everyday Roman life and perspective--such as the role of women, literature, entertainment, town-planning, portraiture, and religion--demonstrating how Rome's growth as a state is inseparable from its social and cultural development.


Ideal for courses in Roman history and Roman civilization, The Romans is enhanced by almost 100 illustrations, more than 30 maps (most produced by the Ancient World Mapping Center), and 22 textual extracts that provide fascinating cultural observations made by ancient Romans themselves.

'scholarly yet readable, recommended for all libraries' Library Journal

ITALY AND THE MEDITERRANEAN WORLD; CHAPTER 2: ROME'S FIRST CENTURIES; CHAPTER 3: ROME AND ITALY IN THE FOURTH CENTURY; CHAPTER 4: THE BEGINNINGS OF A MEDITERRANEAN EMPIRE; CHAPTER 5: ITALY AND EMPIRE; CHAPTER 6: ITALY, THREATENED, ENFRANCHISED, DIVIDED; CHAPTER 7: THE DOMINATION OF SULLA AND ITS LEGACY; CHAPTER 8: END OF THE REPUBLIC; CAESAR'S DICTATORSHIP; CHAPTER 9; AUGUSTUS AND THE TRANSFORMATION OF THE ROMAN WORLD; CHAPTER 10: THE EARLY PRINCIPATE (AD 14-69); THE JULIO-CLAUDIANS, THE CIVIL WAR OF 68-69, AND LIFE IN THE EARLY EMPIRE; CHAPTER 11: INSTITUTIONALIZATION OF THE PRINCIPATE, MILITARY EXPANSION AND ITS LIMITS, THE EMPIRE AND THE PROVINCES (69-138); CHAPTER 12: ITALY AND PROVINCES: CIVIL AND MILITARY AFFAIRS (138-235); CHAPTER 13: THE THIRD CENTURY, THE DOMINATE, AND CONSTANTINE