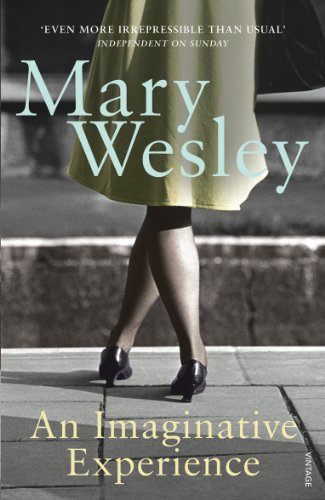 An Imaginative Experience
by Mary Wesley

Used Price
$19.99
inc. GST
Free Shipping in Australia
A train screeches to a halt in the middle of the English countryside and, observed by her fascinated fellow travellers, a woman climbs down and rushes to the aid of a sheep, stranded on its back and unable to rise.
Very Good Good

An Imaginative Experience by Mary Wesley

A train screeches to a halt in the middle of the English countryside and, observed by her fascinated fellow travellers, a woman climbs down and rushes to the aid of a sheep, stranded on its back and unable to rise. Sylvester Weekes watches with interest and noticing, as she turns, that her face is full of tragedy, the woman's lonely image lodges in his mind. But he is not the only one to speculate over her actions - Maurice Benson, former private detective turned full-time birdwatcher, is convinced that the mysterious woman must be tracked down, in whatever way possible. This is a story rich in character and wit, and powerfully moving in its exploration of the heart's pain and deliverance. It is a tale of loss, of release, of an acceptance of the cruelties of fate and of the imaginative experience of love.

Mary Wesley was born near Windsor in 1912. Her education took her to the London School of Economics and during the War she worked in the War Office. Although she initially fulfilled her parent's expectations in marrying an aristocrat she then scandalised them when she divorced him in 1945 and moved in with the great love of her life, Eric Siepmann. The couple married in 1952, once his wife had finally been persuaded to divorce him. She used to comment that her 'chief claim to fame is arrested development, getting my first novel [Jumping the Queue] published at the age of seventy'. She went on to write a further nine novels, three of which were adapted for television, including the best-selling The Camomile Lawn. Mary Wesley was awarded the CBE in the 1995 New Year's honour list and died in 2002.

GOR001388040
An Imaginative Experience by Mary Wesley
Mary Wesley
Used - Very Good
Paperback
Vintage Publishing
2007-04-02
240
0099499096
9780099499091
N/A
Book picture is for illustrative purposes only, actual binding, cover or edition may vary.
The book has been read but remains in clean condition. All pages are intact and the cover is intact. Some minor wear to the spine.