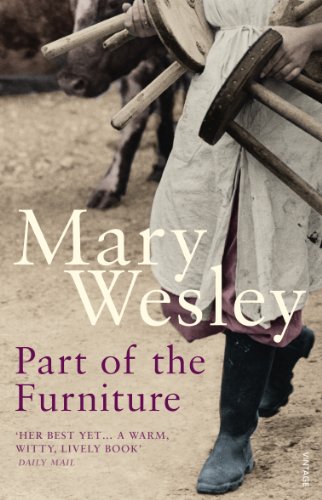 Part Of The Furniture
by Mary Wesley

In Stock
$16.99
+10% GST
Seventeen-year-old Juno Marlowe has just waved off to war the two young men she has loved for the best part of her life when the air raid sirens begin to wail out across London.
Very Good Good Well Read
6 in stock

Part Of The Furniture Summary

Part Of The Furniture by Mary Wesley

Seventeen-year-old Juno Marlowe has just waved off to war the two young men she has loved for the best part of her life when the air raid sirens begin to wail out across London. She is rescued from this nightmare by a gaunt stranger called Evelyn, frail and older than his years, who offers her the protection of his house and his family before dying suddenly in the night. Determined to avoid being sent to Canada to join her mother and new step-father, and still grieving for her lost lovers, Juno instead finds herself on a train to Cornwall in search of Evelyn's family. There she discovers the blossoming of an English spring into which the war only occasionally intrudes and finds at last a peace for herlself and a world in which she is more than simply part of the furniture.

Part Of The Furniture Reviews

"A novel whose freshness of tone, energy of plotting and sweet nature make it exceptional by any standards" * Sunday Telegraph *
"Few novelists offer such a rich concoction of amoral spice and cleverness; but to judge her work exclusively on this level is to miss more subtle rewards" * Mail on Sunday *
"With its brilliant final twist, this is Mary Wesley's best yet" * Evening Standard *

Mary Wesley was born near Windsor in 1912. Her education took her to the London School of Economics and during the War she worked in the War Office. Although she initially fulfilled her parent's expectations in marrying an aristocrat she then scandalised them when she divorced him in 1945 and moved in with the great love of her life, Eric Siepmann. The couple married in 1952, once his wife had finally been persuaded to divorce him. She used to comment that her 'chief claim to fame is arrested development, getting my first novel [Jumping the Queue] published at the age of seventy'. She went on to write a further nine novels, three of which were adapted for television, including the best-selling The Camomile Lawn. Mary Wesley was awarded the CBE in the 1995 New Year's honour list and died in 2002.

GOR002000039
Part Of The Furniture by Mary Wesley
Mary Wesley
Used - Very Good
Paperback
Vintage Publishing
2008-01-03
288
0099513056
9780099513056
N/A
Book picture is for illustrative purposes only, actual binding, cover or edition may vary.
This is a used book - there is no escaping the fact it has been read by someone else and it will show signs of wear and previous use. Overall we expect it to be in very good condition, but if you are not entirely satisfied please get in touch with us.