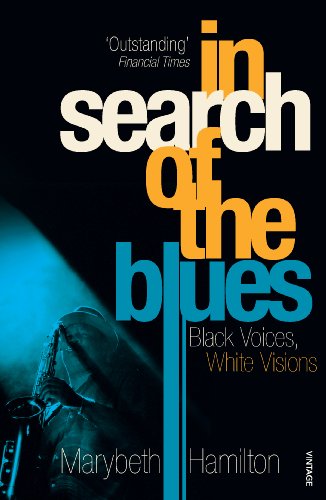 In Search Of The Blues
by Marybeth Hamilton

In Stock
$24.49
inc. GST
Everyone knows the story of the Delta blues, with its fierce, raw voices and tormented drifters and deals with the devil at the crossroads at midnight.
Very Good Well Read
Only 2 left

In Search Of The Blues Summary

In Search Of The Blues: Black Voices, White Visions by Marybeth Hamilton

Everyone knows the story of the Delta blues, with its fierce, raw voices and tormented drifters and deals with the devil at the crossroads at midnight. In this compelling book, Marybeth Hamilton radically rewrites that story. Archaic and primeval though the music may sound, the idea of something called 'Delta blues' emerged in the late twentieth century, the culmination of a longstanding white fascination with 'uncorrupted' black singers, untainted by the city, by commerce, by the sights and sounds of modernity. Written with exquisite grace and sensitivity, at once historically acute and hauntingly poetic, the book is an extraordinary excavation of the blues mystique and provides a deeper understanding of the place of blues within wider American culture.

In Search Of The Blues Reviews

"Fascinating... Hamilton's book deserves to be read, particularly by those who think they've read it all before. In future, all searches for the blues must start here" -- Robert Sandall * Sunday Times *
"Provocatively entertaining...Assiduously researched and beautifully written, what this book reminds us is that the blues has always meant something quite different to white audiences than to black ones" -- Mick Brown * Daily Telegraph *
"Iconoclastic... Marybeth Hamilton proves herself a fine and sensitive detective... It shakes the foundation myth of so much music that followed, as well as explaining a great deal about what it is to be a record collector, itself a dying calling in the age of the iPod" -- Caspar Llewellyn-Smith * Observer *
"An important and often beautifully written piece of historical revisionism" * Observer Music Monthly *
"Hamilton has a keen, unforgiving eye...an eloquent book about people making the forgotten important" -- Roz Kaveney * Time Out *

Marybeth Hamilton was born in California and teaches American history at Birkbeck College, University of London. She is the author of When I'm Bad, I'm Better: Mae West, Sex and American Entertainment.

GOR001956652
In Search Of The Blues: Black Voices, White Visions by Marybeth Hamilton
Marybeth Hamilton
Used - Very Good
Paperback
Vintage Publishing
2008-01-03
256
0712664467
9780712664462
N/A
Book picture is for illustrative purposes only, actual binding, cover or edition may vary.
This is a used book - there is no escaping the fact it has been read by someone else and it will show signs of wear and previous use. Overall we expect it to be in very good condition, but if you are not entirely satisfied please get in touch with us.