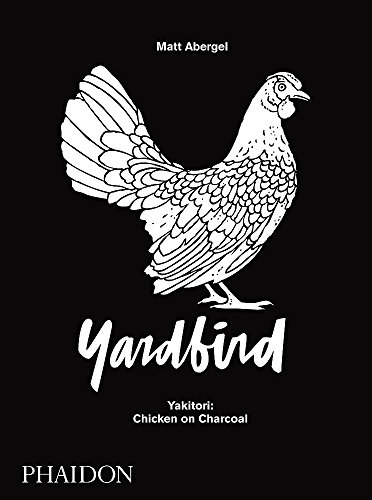 Chicken and Charcoal
by Matt Abergel

Out of Stock
$41.99
inc. GST
The first cookbook from cult yakitori restaurant Yardbird in Hong Kong puts the spotlight on chicken - taking grilling to a whole new level
Like New
Only 0 left

Chicken is the world's best loved meat, and yakitori is one of the simplest, healthiest ways to cook it. At Yardbird in Hong Kong, Canadian chef Matt Abergel has put yakitori on the global culinary map. Here, in vivid style, with strong visual references to Abergel's passion for skateboarding, he reveals the magic behind the restaurant's signature recipes, together with detailed explanations of how they source, butcher, skewer, and cook the birds with no need for special equipment. Fire up the grill, and enjoy. The first comprehensive book about yakitori to be published in English, this book will appeal to home cooks and professional chefs alike.

"Since it opened in 2011, there's no question that Yardbird has earned itself a cult following not just in Hong Kong, but around the world. It's not hard to see why. The vibe is good, the drinks are always flowing, the food is deliciously simple and always prepared with respect - for both the ingredients and for the art of yakitori, the time-honoured Japanese cooking technique in which chicken skewers are grilled over binchotan charcoal and enjoyed with an ice cold beer, sake or cocktail... Chicken and Charcoal, the first ever book about Yardbird (Hong Kong)[...] delves into the restaurant's journey from humble beginnings to the culinary phenomenon it is today. It includes everything from a step-by-step guide to Abergel's grilling techniques, recipes for their signature cocktails, as well as chapters that explain the art of sourcing and butchering... With high praise coming from all corners [...] the restaurant's influence is undeniable, and Chicken and Charcoal perfectly captures the soul of this buzzing Hong Kong hotspot."-AsiaTatler.com

"Matt Abergel, of Hong Kong restaurant Yardbird, has joined the ranks of chef-authors Ferran Adria, Rene Redzepi, Andre Chiang and Magnus Nilsson with the publication of his first book of recipes by Phaidon. The company is one of the world's most prestigious high-end cookbook publishers, and being published by Phaidon is an accolade for any chef."-SCMP.com (South China Morning Post)

"Since opening in Hong Kong's Soho district in 2011, Yardbird's "beak-to-tail" approach to charcoal-grilled chicken and Japanese-inspired cocktails to match has earned it plaudits from the likes of Asia's 50 Best Restaurants as well as a reputation for lengthy customer waiting times... Chicken and Charcoal is [...] the first comprehensive book about yakitori to be published in English."-BK.Asia-City.com (Thailand)

"Much more than a cookbook, Chicken and Charcoal also explores the team's passions and collaborations with artists, designers, illustrators, and brands such as Vans, Carhartt WIP, and Stussy. With its own unique style and strong visual references by artist Evan Hecox, the book reveals the magic behind the restaurant's food and drinks as well as the story of where Yardbird, Hong Kong started, how it grew, and where it is today."-The Nation online (Thailand)

"Matt Abergel has always loved chicken. The Vancouverite skateboarder-turned 'anti-cool' co-founder of Yardbird (Hong Kong's hottest chicken joint) has an almost spiritual connection with the humble bird... A new cookbook published by Phaidon documents Abergel's rise to cross-continental finger-lickin' fame, and treats us to behind-the-scenes workings, recipes and charcoal cookery tricks... The tome is a sensory joy. Complete with functional, graphic depictions of butchery, alongside elegant food photography of Yardbird (Hong Kong)'s modern classics, and notes from the 'under-designed' restaurant interiors, we discover hidden depths to the Yakitori cookery technique Abergel specialises in... The equally flavourful graphic identity is the work of longtime Yardbird collaborator (and fellow skateboard enthusiast) Evan Hecox. His understated, tattoo-like sketches and diagrams are imbued with youth-cultural motifs, and his collages of Hong Kong (Hong Kong) help to make Chicken and Charcoal more than just a recipe book, but a snapshot of a culinary moment, that defies cultures, backgrounds and tastes. We challenge you not to be delighted."-Wallpaper.com

Matt Abergel, an authority on yakitori chicken, is the head chef of Hong Kong-based restaurants Yardbird and Ronin. Having worked at Masayoshi Takayama's Masa in New York and at Hong Kong's Zuma, Abergel opened Yardbird in Hong Kong in 2011. He plans to open a yakitori restaurant in Los Angeles in 2019.

GOR010428096
Chicken and Charcoal: Yakitori, Yardbird, Hong Kong by Matt Abergel
Matt Abergel
Used - Like New
Hardback
Phaidon Press Ltd
2018-07-06
240
0714876453
9780714876450
N/A
Book picture is for illustrative purposes only, actual binding, cover or edition may vary.
The book has been read, but looks new. The book cover has no visible wear, and the dust jacket is included if applicable. No missing or damaged pages, no tears, possible very minimal creasing, no underlining or highlighting of text, and no writing in the margins.