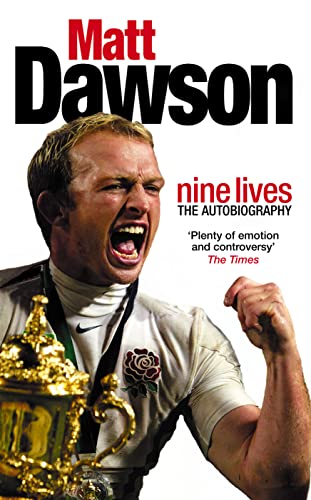 The most capped England rugby scrum-half of all time, a captain of his country, and a two-times British Lions tourist, Matt Dawson's career story is a colourful tale spiced with controversy, from club rugby at Northampton to England winning the Rugby World Cup in Australia. Now fully updated with England's first year as World Champions.

The most capped England rugby scrum-half of all time, a captain of his country, and a two-times British Lions tourist, Matt Dawson's career story is a colourful tale spiced with controversy, from club rugby at Northampton to England winning the Rugby World Cup in Australia. Now fully updated with England's first year as World Champions.

The boy from Birkenhead learnt the game the hard way, working as a security guard and an advertising salesman in his formative years, in the days when rugby players found relief in an active and alcoholic social life. (Dawson: `The drinking started on Saturday night, continued all Sunday and most nights until Thursday.')

Despite the frequent visits to the operating theatre and the physio's table, hard graft for his club Northampton eventually heralded international recognition. Dawson talks about the influential, and occasional obstructive figures in his blossoming career: the likes of John Olver, Will Carling, Ian McGeechan and, more recently, Wayne Shelford, Kyran Bracken and Clive Woodward.

In typically opinionated mode, he also reflects on the successes and failures of the England team and, famously, the Lions in Australia in 2001. After speaking out against punishing schedules, disenchanted players and lack of management support in a tour diary article, Dawson was almost sent home in disgrace. He revisits that bitterly disappointing period in his life and is still not afraid to point out where everything went wrong.

Following England's Rugby World Cup 2003 success, Dawson provides a first-hand account of all the dressing room drama - including a troubled Jonny Wilkinson - and the memorable final itself, followed by the stunning reaction to this historic win back home. And in a new updated chapter for this paperback edition, he reveals how the World Champions have overcome the retirement of key players, reviews the 2004 Six Nations, and looks at his own future in the game.

`Plenty of emotion, plenty of controversy' The Times

Matt Dawson was born in Birkenhead in October 1972. A right-back for Chelsea Boys and a wicketkeeper for Buckinghamshire, Dawson made his international rugby debut for England in 1995 alongside his professional career as a teacher. He went on to become the most capped scrum-half of all time for his country.

Alex Spink is the rugby correspondent of the Mirror, having previously worked for Today and the Express. He was Editor of the Rugby Union Who's Who for 15 years and has co-authored a book with Austin Healey on the 2001 Lions Tour of Australia.

GOR000845318
Matt Dawson: Nine Lives by Matt Dawson
Matt Dawson
Used - Very Good
Paperback
HarperCollins Publishers
2004-12-15
416
0007165676
9780007165674
N/A
Book picture is for illustrative purposes only, actual binding, cover or edition may vary.
This is a used book - there is no escaping the fact it has been read by someone else and it will show signs of wear and previous use. Overall we expect it to be in very good condition, but if you are not entirely satisfied please get in touch with us.