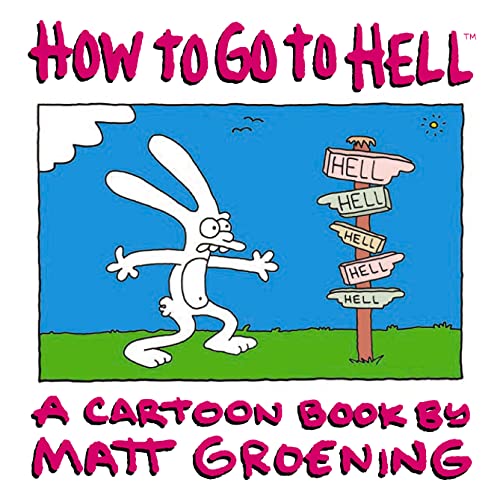 How to Go to Hell
by Matt Groening

Find out how in the hell to get to Hell in Matt Groening's indispensable collection of comic strips on which `The Simpsons' was based.

How to Go to Hell Summary

Find out how in the hell to get to Hell in Matt Groening's indispensable collection of comic strips on which `The Simpsons' was based.

This handy compendium of creepy cartoons won't pay your taxes, bring you true love, or help you achieve nirvana, but it will help you cope with the hell we call life with a few more giggles and snorts.

With dozens of hints for the hellbound, this sizzling smorgasbord of a book featuring Blinky, Bongo, Sheba, Akbar and Jeff is just the thing if you're in Hell, from Hell, going to Hell or hellbent.

Life in Hell was the syndicated newspaper cartoon strip by Matt Groening which ran in the States during the 80s and early 90s. Asked to turn the characters into TV animation, Groening instead developed The Simpsons, retaining many of the characteristics of Binky, Bongo, Sheba, Jeff and Akbar in the series. In a world where The Simpsons and Futurama are as popular as ever, these hellish cartoons featuring Matt Groening's zany brand of comic genius are simply gold dust.

How to Go to Hell Reviews

"No other cartoonist these days is more fatalistic - or funnier" Booklist

"The jokes hit too close to home" LA Times

"Funniest, most sneakily radical strip in the country" Village Voice

Matt Groening is the genius behind `The Simpsons' and `Futurama'. Which says it all really.

GOR003134242
How to Go to Hell: A Cartoon Book by Matt Groening by Matt Groening
Matt Groening
Used - Good
Paperback
HarperCollins Publishers
2004-07-21
48
0007180241
9780007180240
N/A
Book picture is for illustrative purposes only, actual binding, cover or edition may vary.
The book has been read but remains in clean condition. All pages are intact and the cover is intact. Some minor wear to the spine.