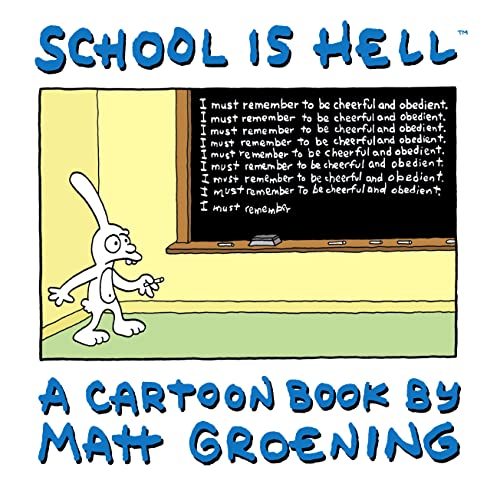 School is Hell
by Matt Groening

Educate yourself with this comic compendium of cartoon strips from the genius behind The Simpsons.

Educate yourself with this comic compendium of cartoon strips from the genius behind The Simpsons.

From kindergarten to graduation, this is a snapshot of school-life, featuring the befezzed duo Akbar and Jeff as well as Blinky, Bongo and Sheba the fuzzy rabbits, from the definitive doodler Matt Groening.

The most hellish subject of all - school - is the subject of this vital tome, as Matt turns to his well of wit and wacky wizardry to create a comicopia of childhood. Lessons include: How to drive a crazy teacher crazier (includes: 3 annoying ways to ask to go to the lavatory).

Teacher's can be illuminated too, with the Teacher's Guide to Words that Make Kids Snicker.

Life in Hell was the syndicated newspaper cartoon strip by Matt Groening which ran in the States during the 80s and early 90s. Asked to turn the characters into TV animation, Groening instead developed The Simpsons, retaining many of the characteristics of Binky, Bongo, Sheba, Jeff and Akbar in the series. In a world where The Simpsons and Futurama are as popular as ever, these hellish cartoons featuring Matt Groening's zany brand of comic genius are simply gold dust.

Matt Groening is the genius behind The Simpsons and Futurama. Which says it all really.

GOR000798183
School is Hell: A Cartoon Book by Matt Groening by Matt Groening
Matt Groening
Used - Very Good
Paperback
HarperCollins Publishers
2004-01-19
48
0007179243
9780007179244
N/A
Book picture is for illustrative purposes only, actual binding, cover or edition may vary.
This is a used book - there is no escaping the fact it has been read by someone else and it will show signs of wear and previous use. Overall we expect it to be in very good condition, but if you are not entirely satisfied please get in touch with us.