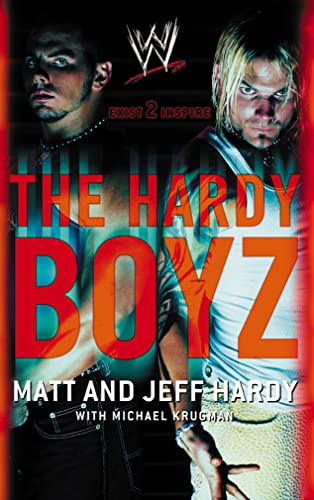 The Hardy Boyz by Matt Hardy

An electrifying memoir from the WWE's favorite Bad Boys - featuing their days as the best tag team in WWE, and their recent individual achievemets in the RAW and Smackdown shows.

The Hardy Boyz by Matt Hardy

An electrifying memoir from the WWE's favorite Bad Boys - featuing their days as the best tag team in WWE, and their recent individual achievemets in the RAW and Smackdown shows.

From the tragic loss of their mother during their childhood to the world of professional wrestling, follow Matt and Jeff Hardy on their journey from Cameron, North Carolina, to World Wrestling Entertainment.

The journey began in 1997, when Matt made his debut in the WWE singles competition. He showed courage while facing strong opposition, but after limited success, Matt - making a decision that would change the face of the WWE - enlisted the aid of his brother, Jeff, to form a tag team. In one of their first televised matches, Kane (a Tag Team Champion on numerous occasions) quickly defeated the inexperienced tandem, throwing them out of the ring and on to the cold arena floor.

Battered but not beaten, the Hardyz spent valuable time at the Federation's training camp, honing their skills in preparation for the spotlight. And the spotlight they got. After beating the Edge & Christian in a best-of-five tournament - The Terri Invitational Tournament - their position in the WWE firmament was secured.

Now having gone their separate ways to concentrate on the singles division, this sibling rivalry has added extra spice to an already sizzling atmosphere.

Matt and Jeff Hardy were born in Cameron, North Carolina and as children practised aerial assaults and manoeuvres on a large trampoline. After earning a favourable reputation in Cameron they wrestled in a number of independent organisations before finally making it to the WWE.

GOR001239023
The Hardy Boyz by Matt Hardy
Matt Hardy
Used - Very Good
Paperback
HarperCollins Publishers
2004-03-01
288
0007162545
9780007162543
N/A
Book picture is for illustrative purposes only, actual binding, cover or edition may vary.
This is a used book - there is no escaping the fact it has been read by someone else and it will show signs of wear and previous use. Overall we expect it to be in very good condition, but if you are not entirely satisfied please get in touch with us
Trustpilot