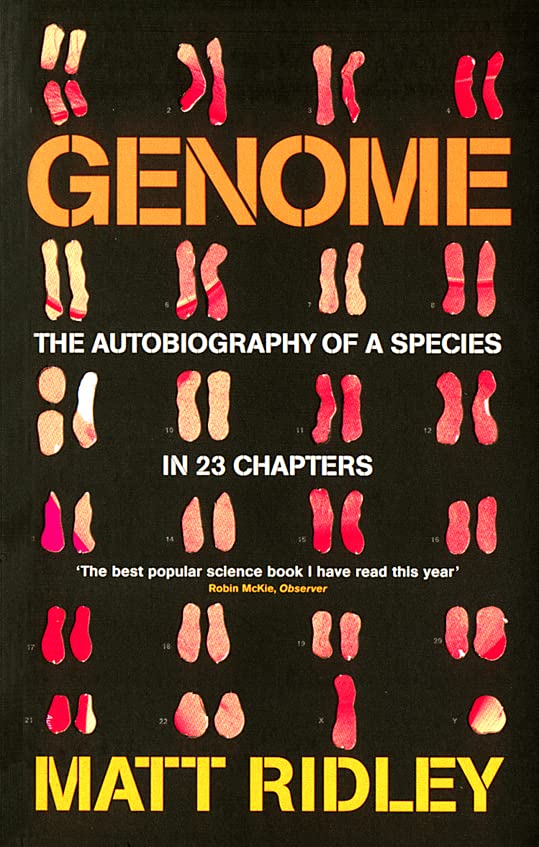 The most important investigation of genetic science since The Selfish Gene, from the author of the critically acclaimed and best-selling The Red Queen and The Origins of Virtue.

Genome: The Autobiography of a Species in 23 Chapters by Matt Ridley

The most important investigation of genetic science since The Selfish Gene, from the author of the critically acclaimed and best-selling The Red Queen and The Origins of Virtue.

The genome is our 100,000 or so genes. The genome is the collective recipe for the building and running of the human body. These 100,000 genes are sited across 23 pairs of chromosomes. Genome, a book of about 100,000 words, is divided into 23 chapters, a chapter for each chromosome. The first chromosome, for example, contains our oldest genes, genes which we have in common with plants.

By looking at our genes we can see the story of our evolution, what makes us individual, how our sexuality is determined, how we acquire language, why we are vunerable to certain diseases, how mind has arisen. Genome also argues for the genetic foundations of free will. While many believe that genetics proves biological determinism, Ridley will show that in fact free will is itself in the genes. Everything that makes us human can be read in our genes. Early in the next century we will have determined the function of every one of these 100,000 genes.

?Remarkable. . . . Hops from one human chromosome to the next in search of the most delightful stories.?--"New York Times Book Review?A fascinating tour of the human genome. . . . If you want to catch a glimpse of the biotech century that is now dawning, and how it will make life better for us all, Genome is an excellent place to start.?--"Wall Street Journal?A superb writer whose exquisite, often moving descriptions of life's designs remind me of the best work of the late Lewis Thomas. . . . He crafts some of the clearest explanations of complex biological processes that I have encountered. What's more, he captures their slippery beauty.?-- Susan Okie, "Washington Post Book World?Ridley is a lucid, engaging and enthusiastic guide to the double-helical DNA that comprises our inheritable human essence.?-- "Los Angeles Times Book Review?Ridley can explain with equal verve difficult moral issues, philosophical quandaries and technical biochemistry; he distinguishes facts from opinions well, and he's not shy about offering either. Among many recent books on genes, behavior and evolution, Ridley's is one of the most informative. It's also the most fun to read.?--"Publishers Weekly (starredreview)?Superb popular science writing and cogent public affairs argumentation.?--"Booklist (starred review)?An engrossing account of the genetic history of our species. . . . This book will be particularly relevant to lay readers, providing insight into how far we have come and where we are heading in the understanding of our genetic heritage.?--"Library Journal?Ridley . . . deftly takes up the story of the genome in 23 chapters in clear entertaining prose. Eminently readable, compelling and important.?--"Kirkus Reviews?A lucid and exhilarating romp through our 23 human chromosomes that lets us see how nature and nature combine to make us human.?--James Watson?With riveting anecdotes, clever analogies and compelling writing, Matt Ridley makes the human genome come alive for us. I was left in awe at the wonder of the human body, and the scientists who unravel its mysteries.?--Abraham Verghese, author of " The Tennis Partner ?Clever, up-to-the-minute informative, and an altogether spellbinding read. Ridley does just what a first-rate journalist should do: get it right, make in interesting, then wisely put it all in perspective.? --SarahHardy, author of " Mother Nature?"Genome is a tour de force: clear, witty, timely and informed by an intelligence that sees new knowledge as a blessing and not a curse. . . . A cracking read.?--"Times (of London)?Matt Ridley's brilliant new book is eloquent and up-to-date. . . . A much needed breath of fresh air.?--"Daily Telegraph?Compelling. . . . Spectacular. . . . This is one of those rare books in which the intellectual excitement continues to rise from what already seems an almost impossibly high plateau. . . . Not even the scientifically purblind will fail to perceive the momentous nature of the issues he raises.?--"Spectator? A dazzling work of popular science, offering clarity and inspiration. . . . Witty erudition.?--"Guardian?Erudition, intriguing sequences of anecdotes and . . . stylish prose. The combination has resulted in the best popular science book I have read this year, a worthy autobiography of mankind.?--"Observer?An exciting voyage . . . very much up-to-date . . . Ridley includes just the right amount of history and personal anecdote to spice up science. He's a good storyteller.?-- "ScientificAmerican?An extraordinarily nimble synthesist, Ridley leaps from chromosome to chromosome in a handy summation of our ever increasing understanding of the roles that genes play in disease, behavior, sexual differences, and even intelligence. More important, though, he addresses not only the ethical quandaries faced by contemporary scientists but the reductionist danger in equating inheritability with inevitability.?-- "The New Yorker?Matt Ridley [writes] with a combination of biblical awe, scientific curiosity and wit about what many consider the greatest scientific breakthrough of the 20th century and the greatest technological challenge of the 21st: the discovery of the molecular basis of life and its many applications in medicine, law, and commerce.?-- "Dallas Morning News?Thoroughly fascinating. . . . A sophisticated blending of science and public policy certain to educate, entertain, challenge and stimulate even the least technologically inclined reader.?--"Philadephia Inquirer?Lively phrasing and vivid analogies . . . I gained an appreciation for the incredible complexity of human beings.?--"Minneapolis Star-Tribune?With skillful writing and masterful knowledge of his subject matter, Ridley conveys a wealth of information about what we currentlyknow, or think we know, about the human genome?No well-educated person can afford to remain ignorant of this advancing science. GENOME provides a sound and engaging introduction.?--Austin American-Statesman

Matt Ridley received his BA and D Phil at Oxford researching the evolution of behaviour. He has been science editor, Washington correspondent and American editor of The Economist. He has a regular column in the Daily Telegraph. He is also the author of The Red Queen (1993) and The Origins of Virtue (1996). Matt Ridley is currently the chairman of The International Centre for Life.

GOR001230039
9781857028355
185702835X
Genome: The Autobiography of a Species in 23 Chapters by Matt Ridley
Matt Ridley
Used - Very Good
Paperback
HarperCollins Publishers
2000-03-16
352
Short-listed for Aventis Prize for Science Books 2000 Short-listed for Aventis Prizes for Science Books: General Prize 2000 Short-listed for Samuel Johnson Prize for Non-Fiction 2000
Book picture is for illustrative purposes only, actual binding, cover or edition may vary.
This is a used book - there is no escaping the fact it has been read by someone else and it will show signs of wear and previous use. Overall we expect it to be in very good condition, but if you are not entirely satisfied please get in touch with us
Trustpilot