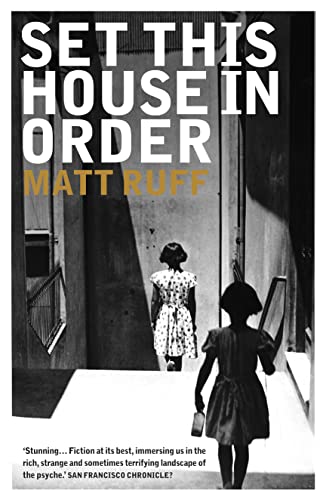 Set This House in Order
by Matt Ruff

A hugely inventive, hugely readable novel about two young people with Multiple Personality Disorder, 'A gripping novel of suspense that could have come from the pen of Stephen King at his best.' Daily Telegraph

Set This House in Order Summary

Set This House in Order by Matt Ruff

A hugely inventive, hugely readable novel about two young people with Multiple Personality Disorder, 'A gripping novel of suspense that could have come from the pen of Stephen King at his best.' Daily Telegraph

`Mouse is lying in a strange bed, in a strange house, with her hand pressed between the thighs of a man she has never seen before. She doesn't know what day it is, or what city; she has no idea how she got there... She doesn't scream. She wants to, but a lifetime of losing time - and covering up the fact - has left her skilled at controlling her reactions. She screams inside.'

Penny Driver - 'Mouse' - suffers from Multiple Personality Disorder, blacking out whenever one of her other personalities takes control of her mind and body. So when Penny discovers that her new colleague Andrew Gage also suffers from MPD, she asks for his help. Through therapy, Andrew's personalities have long since learnt to co-exist in harmony in an imaginary house inside his head, but Andrew's 'house' is not quite so ordered as he would like to believe. In helping Penny, he discovers a locked door under the stairs, deep in his unconscious - a door that hides the dark secret as to why Andrew's childhood mind shattered in the first place...

Set This House in Order Reviews

`Exceptional... Reading those first pages, you feel real excitement: the thump in head and heart of a captivating idea; the creepiness of a fairytale; the wonderment of coming across something which feels both original and authoritatively imagined.' Daily Telegraph

`Ultimately a good old-fashioned crime novel, Set This House in Order is as readable as the most golden of golden age mysteries.' New Statesman

'Irresistible... Ruff excels at the changes in bearing, speech, even appearance when someone new blows in. This may sound fantastic, but he makes them utterly convincing. Throughout, Ruff deftly evokes the comedy and pain of maintaining such an elaborate inner life.' New York Times

'A stunning feat of literary craftsmanship, gripping for all of its 479 pages... Set This House in Order is pure literary fiction at its best, immersing us in the rich, strange and sometimes terrifying landscape of the psyche.' San Francisco Chronicle

'Stunning... In no time we've fallen into Andrew's way of seeing life through many eyes. The conclusion packs a wallop, but this is ultimately a romantic story, and so even the truth is delivered tenderly. Remarkably, Set This House in Order brings extraordinary warmth to the chilliest of childhoods.' Oprah Magazine

'Riveting in its external plot as well as its interior secrets (will Andrew discover hidden horrors about his stepfather?), Set This House in Order is not so much a whodunit as a whoisit... Drawing most of his dramatis personae from the motley personalities of two thoroughly fetching characters, Ruff has created a shockingly likable suspense story... Extraordinary.' Boston Globe

Matt Ruff is the author of Sewer, Gas & Electric and Fool on the Hill. He is married and lives in Seattle, Washington.

GOR000832042
Set This House in Order by Matt Ruff
Matt Ruff
Used - Very Good
Paperback
HarperCollins Publishers
2003-10-20
496
0007164238
9780007164233
N/A
Book picture is for illustrative purposes only, actual binding, cover or edition may vary.
This is a used book - there is no escaping the fact it has been read by someone else and it will show signs of wear and previous use. Overall we expect it to be in very good condition, but if you are not entirely satisfied please get in touch with us.