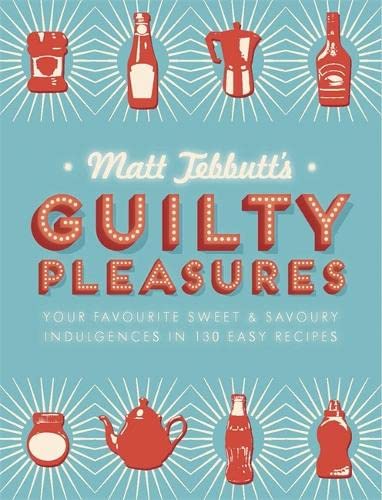 Used Price
$36.99
inc. GST
Free Shipping in Australia
A little bit of what you fancy does you good! Matt Tebbutt transforms your sneaky treats and guilty pleasures into 130 easy, delicious recipes for family and friends.
Reviews:
Trustpilot
Very Good

We all know that a little bit of what you fancy does you good. In Guilty Pleasures, Matt Tebbutt takes your sneaky treats, like peanut butter, cream cheese, coffee and even booze, and puts them centre stage in 130 fun and delicious recipes. Enjoy great food such as tea-smoked chicken, raspberry cream cheese brownies, peanut butter ice cream, vodka-marinated steak, wide-awake chilli, Marmite potatoes, rum cupcakes with Baileys frosting and so much more. In a world where we have so many serious things to worry about, a bit of mild indulgence shouldn't be one of them. Like all guilty pleasures, a little bit of sin has never really been a bad thing...has it? This is pleasure on a plate!

'Matt Tebbutt's new book is the ideal partner in crime. If there is such a thing as politically incorrect food, this is it, with 130 simple recipes which blow an insolent raspberry (probably chocolate covered) in the face of the food police' Daily Mail. * Daily Mail *
'Matt has combined his love of casual dining with his chef's training, so that the recipes are creative, affordable, easy to make and delicious' mightyspicekitchen.com. * mightyspicekitchen.com *

A graduate of Leith's School of Food and Wine, Matt has worked with some of the biggest names in food, including Marco Pierre White, Bruce Poole (Chez Bruce), Sally Clarke (Clarke's) and Alastair Little. He now owns and runs the acclaimed Foxhunter pub in Nant-y-derry, South Wales, for which he won AA Restaurant of the Year for Wales. Matt lives in Nant-y-derry with his wife and children.

GOR005401334
Matt Tebbutt's Guilty Pleasures: Your Favourite Sweet and Savoury Indulgences in 130 Easy Recipes by Matt Tebbutt
Matt Tebbutt
Used - Very Good
Hardback
Quercus Publishing
2013-07-04
224
1782064672
9781782064671
N/A
Book picture is for illustrative purposes only, actual binding, cover or edition may vary.
This is a used book - there is no escaping the fact it has been read by someone else and it will show signs of wear and previous use. Overall we expect it to be in very good condition, but if you are not entirely satisfied please get in touch with us.