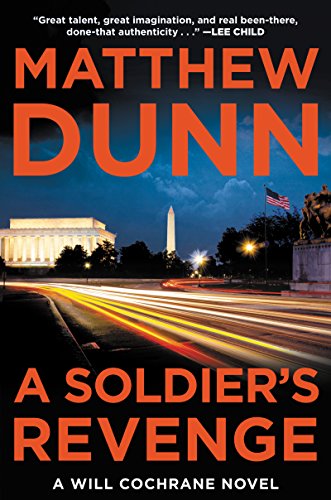 A Soldier's Revenge
by Matthew Dunn

Out of Stock
$20.49
inc. GST
He's agreed to adopt the twin sons of his former colleague and Navy SEAL operative Roger Koenig, and had been on his way to pick them up before he'd awakened to the carnage in New York.

Will knows his only chance to clear his name is to find the real killer while he's still free.

A Soldier's Revenge: A Will Cochrane Novel by Matthew Dunn

Former intelligence agent Will Cochrane must evade US authorities hunting him down for a murder he didn't commit in this captivating sixth entry in the acclaimed action-thriller series. Former operative Will Cochrane wakes up in New York's Waldorf Astoria and is horrified to see blood on his hands-something he remembers absolutely nothing about. When he then finds a woman murdered in his bathroom he knows he's stepped into a wilderness of terror that is far more dangerous than anything he's ever faced. With no memory of the night before nor of the unfortunate woman, Will believes he is being framed and needs to outrun the police who will be looking for him very soon. Until this moment, Will has been on the precipice of a new life, one outside the intelligence service, and one that includes fatherhood. He's agreed to adopt the twin sons of his former colleague and Navy SEAL operative Roger Koenig, and had been on his way to pick them up before he'd awakened to the carnage in New York. Will knows his only chance to clear his name is to find the real killer while he's still free. But he also has to find the twins, suspecting that they're in danger as well. In Virginia, he discovers one boy alive and his brother missing and most likely kidnapped. What he also finds is a secret recording of a voice that might be the killer's. The only clue to his identity his thick European accent. With local police, the FBI, and even his friends pursuing him, the clever and ruthless operative must track down his adversary, save the boys, and prove his innocence before it's too late. A superb blend of action and thrills that will keep readers on the edge of their seats, A Soldier's Revenge is perfect for fans of Brad Thor, Daniel Silva, and Lee Child.

"One of the things that makes A Soldier's Revenge so good, aside from the complexity of the plot, the harrowing escapes and spy craft that Dunn artfully employs, is the visceral feelings that he can convey... Cochrane is no emotionless Bond...he's much more real." -- blackdogspeaks.com on A Soldier's Revenge

As an MI6 field officer, Matthew Dunn recruited and ran agents, coordinated and participated in special operations, and acted in deep-cover roles throughout the world. He operated in environments where, if captured, he would have been executed. Dunn was trained in all aspects of intelligence collection, deep- cover deployments, small arms, explosives, military unarmed combat, surveillance, and infiltration. Medals are never awarded to modern MI6 officers, but Dunn was the recipient of a rare personal commendation from the secretary of state for work he did on one mission, which was deemed so significant that it directly influenced the success of a major international incident. During his time in MI6, Matthew conducted approximately seventy missions. All of them were successful. He currently lives in England, where he is at work on his next novel.

GOR010304773
A Soldier's Revenge: A Will Cochrane Novel by Matthew Dunn
Matthew Dunn
Used - Good
Hardback
HarperCollins Publishers Inc
2016-10-24
320
0062427199
9780062427199
N/A
Book picture is for illustrative purposes only, actual binding, cover or edition may vary.
The book has been read but remains in clean condition. All pages are intact and the cover is intact. Some minor wear to the spine.