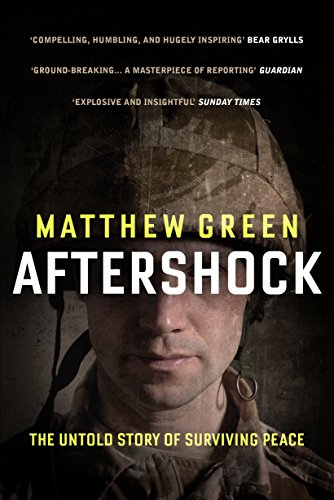 In Stock
$17.49
inc. GST
A gripping and groundbreaking book that tells the inside story of how the men and women we dispatch to fight our battles adapt to life outside the combat zone
Very Good
Only 2 left

Aftershock: The Untold Story of Surviving Peace by Matthew Green

Over the last decade, we have sent thousands of people to fight on our behalf. But what happens when these soldiers come back home, having lost their friends and killed their enemies, having seen and done things that have no place in civilian life? In Aftershock, Matthew Green tells the story of our veterans' journey from the frontline of combat to the reality of return. Through wide-ranging interviews with former combatants -- including a Royal Marine sniper and a former operator in the SAS - as well as serving personnel and their families, physicians, therapists, and psychiatrists, Aftershock looks beyond the headline-grabbing statistics and the labels of post-traumatic stress disorder to get to the heart of today's post-conflict experience. Green asks what lessons have been learned from past wars, and explores the range of help currently available, from traditional talking cures to cutting-edge scientific therapies. As today's battle-scarred troops begin to lay their weapons down, Aftershock is a hard-hitting account of the hidden cost of conflict. And its message is one that has profound implications, not just for the military, but for anyone with an interest in how we experience trauma and survive.

A moving and illuminating book [that] reports on the lives, struggles and triumphs of returned combat veterans and their families
A thoughtful, unsensational account of a significant problem
Compelling, humbling and hugely inspiring accounts from the real heroes of our era. We have a duty to understand what these men have given on our behalf--Bear Grylls
An urgent manifesto... [Green's] book sharply exposes the faults in the current system... The stories Green has collected are so powerful because they are some of the only means we have of measuring the true scale of PTSD...
Unsentimental but horribly affecting... mixing journalistic rigour with historical investigation [and written] in prose thrilling enough for a bestselling novel

For the past fourteen years, MATTHEW GREEN has worked as a correspondent for Reuters and the Financial Times, reporting from over thirty countries, including Iraq and Afghanistan. His first book, The Wizard of the Nile: The Hunt for Joseph Kony, won a Jerwood Award and was longlisted for the Orwell Prize. His writing has also appeared in the Economist, The Times and Esquire. www.matthewgreenjournalism.com

GOR007760139
Aftershock: The Untold Story of Surviving Peace by Matthew Green
Matthew Green
Used - Very Good
Paperback
Granta Books
2016-07-07
336
1846273315
9781846273315
N/A
Book picture is for illustrative purposes only, actual binding, cover or edition may vary.
This is a used book - there is no escaping the fact it has been read by someone else and it will show signs of wear and previous use. Overall we expect it to be in very good condition, but if you are not entirely satisfied please get in touch with us.