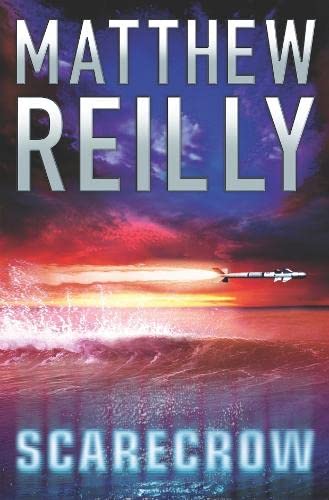 As 'Scarecrow' Schofield watches his mission to take out a secret missile dump in Siberia turn into a bloodbath, he discovers he has been tricked and is now the prey rather than the predator. An international consortium of staggering power and wealth has included his name on a mystery list of fifteen targets to be eliminated without fail by twelve noon on 31 December.

Now every high-powered bounty hunter on the planet is on his trail. While Schofield battles to evade them on every side, he must simultaneously track down the perpetrators of a conspiracy that could soon reduce many of the major cities of the world to ashes. And behind that lies a secret agenda even more terrifying ...

From arctic Russia to the Afghan border, from France's Atlantic coast to a speed-of-light conflict over the Suez Canal, every form of ultra-tech weaponry comes into play in a spellbinding action drama that unfolds within a mere twenty-four hours.

"The text is all fury, akin to taking a James Bond film, cutting out everything but the action and running that at double speed. As much video game as novel. Reilly's admirers will love this one, and anyone interested in the outer limit of action writing should check it out."--"Publishers Weekly" "James Bond and Dirk Pitt can step aside-a new action hero has arrived to take their place in Reilly's latest roller-coaster ride. This thrill fest is highly recommended for all fiction collections-even the most jaded readers will need to fasten their seatbelts and hang on for dear life."--"Booklist" ""Scarecrow" should come with a blood pressure cuff shrink-wrapped to it. Nonstop action, adventure, and a HUGE surprise for fans of Reilly's other Schofield novels-what more could you ask for from a novel? You'll give up television forever after reading "Scarecrow,""--Bookreporter.com "Lightning-paced."--"Entertainment Weekly" "Move over, Jack Ryan and Dirk Pitt-Marine Shane "Scarecrow" Schofield is the next great action hero. Matthew Reilly's well-developed characters and nonstop action more than compensate for an implausible plot."--"Dallas Morning News" "The pace is breakneck... will hook you right from the start."--"Waterstone's Books Quarterly "(UK) "This is unashamedly ball-busting reading... it certainly clears the palette."--"Arena" (UK) "Here's pace, jargon, diagrams, gadgets and guns to get excited about... "Scarecrow" is breathless."--"Mirror" (UK)

Matthew Reilly, born and still resident in Sydney, studied law before turning his pen to fiction. His previous novels, Contest, Ice Station, Temple and Area 7, have been massive bestsellers in every continent.

GOR001758356
Scarecrow by Matthew Reilly
Matthew Reilly
The Scarecrow series
Used - Very Good
Hardback
Pan Macmillan
2003-10-03
448
0333906276
9780333906279
N/A
Book picture is for illustrative purposes only, actual binding, cover or edition may vary.
This is a used book - there is no escaping the fact it has been read by someone else and it will show signs of wear and previous use. Overall we expect it to be in very good condition, but if you are not entirely satisfied please get in touch with us.