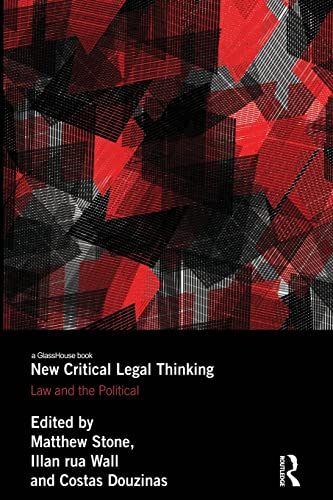 New Critical Legal Thinking articulates the emergence of a stream of critical legal theory which is directly concerned with the relation between law and the political. The early critical legal studies claim that all law is politics is displaced with a different and more nuanced theoretical arsenal. Combining grand theory with a concern for grounded political interventions, the various contributors to this book draw on political theorists and continental philosophers in order to engage with current legal problematics, such as the recent global economic crisis, the Arab spring and the emergence of biopolitics. The contributions instantiate the claim that a new and radical political legal scholarship has come into being: one which critically interrogates and intervenes in the contemporary relationship between law and power.

GOR010322034
New Critical Legal Thinking: Law and the Political by Matthew Stone
Matthew Stone
Used - Very Good
Paperback
Taylor & Francis Ltd
2014-03-14
280
0415533058
9780415533058
N/A
Book picture is for illustrative purposes only, actual binding, cover or edition may vary.
This is a used book - there is no escaping the fact it has been read by someone else and it will show signs of wear and previous use. Overall we expect it to be in very good condition, but if you are not entirely satisfied please get in touch with us.