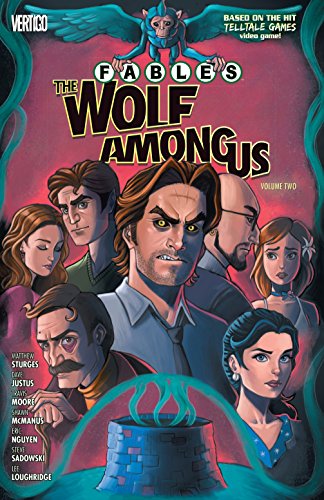 Fables The Wolf Among Us Vol. 2
by MATTHEW STURGES

Fables The Wolf Among Us Vol. 2 Summary

Fables The Wolf Among Us Vol. 2 by MATTHEW STURGES

As sheriff of Fabletown, Bigby Wolf has seen his share of unbelievable--and seemingly unsolvable--crimes. Before all that, though, he was faced with the greatest tests of his career... Someone is killing people on Bigby's watch--now he and Snow White must intensify their search for an increasingly elusive and brutal killer. On the path to justice and retribution, they encounter secret passageways, mysterious new lands and some familiar faces from Fabletown. Fables: The Wolf Among Us is a gripping adaptation and expansion of the smash-hit video game from Telltale Games, and an official prequel to Bill Willingham's best-selling Fables! Written by Fables alum Matthew Sturges (Jack of Fables) and Dave Justus (House of Mystery), with art by Stephen Sadowski (JSA), Shawn McManus (Fables/Fairest), Eric Nguyen (Crossing Midnight) and Travis Moore (JSA All Stars)! Collects the digital-first series Fables: The Wolf Among Us #9-16.

Fables The Wolf Among Us Vol. 2 Reviews

Matthew Sturges has written a number of comics for DC, including House of Mystery, Justice Society of America and the Eisner-nominated Jack of Fables (with Bill Willingham). He has also written the novel Midwinter, available from Pyr, and its sequel The Office of Shadow.

GOR009209201
Fables The Wolf Among Us Vol. 2 by MATTHEW STURGES
MATTHEW STURGES
Used - Very Good
Paperback
DC Comics
2016-07-05
1
140126137X
9781401261375
N/A
Book picture is for illustrative purposes only, actual binding, cover or edition may vary.
This is a used book - there is no escaping the fact it has been read by someone else and it will show signs of wear and previous use. Overall we expect it to be in very good condition, but if you are not entirely satisfied please get in touch with us.