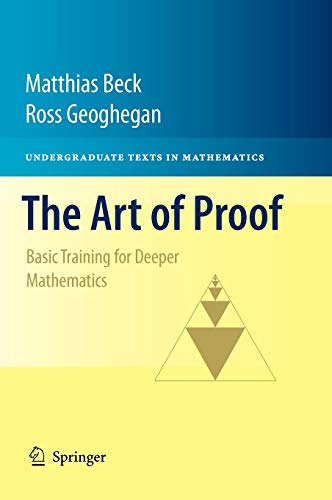 The Art of Proof by Matthias Beck

The topics covered include: integers, induction, algorithms, real numbers, rational numbers, modular arithmetic, limits, and uncountable sets. The book ends with short essays on further topics suitable for seminar-style presentation by small teams of students, either in class or in a mathematics club setting.

The Art of Proof: Basic Training for Deeper Mathematics by Matthias Beck

The Art of Proof is designed for a one-semester or two-quarter course. A typical student will have studied calculus (perhaps also linear algebra) with reasonable success. With an artful mixture of chatty style and interesting examples, the student's previous intuitive knowledge is placed on solid intellectual ground. The topics covered include: integers, induction, algorithms, real numbers, rational numbers, modular arithmetic, limits, and uncountable sets. Methods, such as axiom, theorem and proof, are taught while discussing the mathematics rather than in abstract isolation. The book ends with short essays on further topics suitable for seminar-style presentation by small teams of students, either in class or in a mathematics club setting. These include: continuity, cryptography, groups, complex numbers, ordinal number, and generating functions.

The Art of Proof is a surprising union of rigor with taste and wit. The authors take a hard-core axiomatic approach, but the writing is never dry. Instead, topics are carefully chosen and meticulously developed with grace and humor, careful attention to detail, and just the right number of skill-building exercises and thought-provoking problems.

The text is spare-well under two hundred pages-but contains a thorough axiomatic development of the integers and the reals, along with non-standard optional topics such as Cayley graphs and generating functions. Instead of the standard scattershot symbolic logic-set theory-functions-proof by contradiction-zzzz... books, this text keeps its focus on just a few fundamental ideas, of which induction is the most important. This helps my students to feel that they are participants in a grand undertaking-the construction of a number system-rather than passive victims of one proof technique after another. -Paul Zeitz (Mathematics Professor at the University of San Francisco)

This qualitative transition presents a most acute pedagogical challenge. ... This book does feature definite mathematical content, contrasting with works that aim at decoupling purely logical apparatus from strictly mathematical concerns. ... The authors write with the authority of research mathematicians and clearly mean to open that avenue to students. Summing Up: Recommended. Upper-division undergraduates through professionals. (D. V. Feldman, Choice, Vol. 48 (8), April, 2011)

This book offers an approach well-balanced between rigor and clarifying simplification. Dilbert and Foxtrot cartoons with philosophical quotes presage the introduction of axioms and preliminary propositions. This graceful and witty blend succeeds well in a textbook for a post-calculus course transitioning a student to higher mathematics. The Art of Proof can also well serve independent readers looking for a solitary path to a vista on higher mathematics. (Tom Schulte, The Mathematical Association of America, November, 2010)

This is an undergraduate text to extend, in a deeper and formal way, the usual initial knowledge of mathematics. The book deals with classical topics like integers, induction, algorithms, real numbers, rational numbers, modular arithmetic, limits, uncountable sets ... . The publication may be useful for people using the book to teach a course on the above mentioned topics. ... The aim behind this textbook is teaching how to read and write mathematics as well as understanding key methods and concepts. (Claudi Alsina, Zentralblatt MATH, Vol. 1198, 2010)

Matthias Beck received his initial training in mathematics in Wurzburg, Germany, received his Ph.D. in mathematics from Temple University, and is now associate professor of mathematics at San Francisco State University. He is the recipient of the 2013 MAA Haimo Award for Distinguished College or University Teaching of Mathematics. He is the author of a previously published Springer book, Computing the Continuous Discretely (with Sinai Robins).

Preface.- Notes for the Student.- Notes for Instructors.- Part I: The Discrete.- 1 Integers.- 2 Natural Numbers and Induction.- 3 Some Points of Logic.- 4 Recursion.- 5 Underlying Notions in Set Theory.- 6 Equivalence Relations and Modular Arithmetic.- 7 Arithmetic in Base Ten.- Part II: The Continuous.- 8 Real Numbers.- 9 Embedding Z in R.- 10. Limits and Other Consequences of Completeness.- 11 Rational and Irrational Numbers.- 12 Decimal Expansions.- 13 Cardinality.- 14 Final Remarks.- Further Topics.- A Continuity and Uniform Continuity.- B Public-Key Cryptography.- C Complex Numbers.- D Groups and Graphs.- E Generating Functions.- F Cardinal Number and Ordinal Number.- G Remarks on Euclidean Geometry.- List of Symbols.- Index.
NPB9781441970220
9781441970220
1441970223
The Art of Proof: Basic Training for Deeper Mathematics by Matthias Beck
Matthias Beck
Undergraduate Texts in Mathematics
New
Hardback
Springer-Verlag New York Inc.
20100831
182
N/A
Book picture is for illustrative purposes only, actual binding, cover or edition may vary.
This is a new book - be the first to read this copy. With untouched pages and a perfect binding, your brand new copy is ready to be opened for the first time
Trustpilot