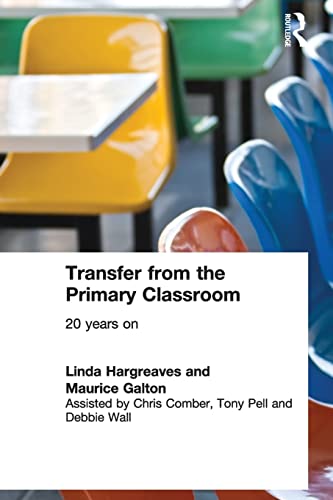 Transfer from the Primary Classroom
by Maurice Galton

Used Price
$17.49
inc. GST
Free Shipping in Australia
The ORACLE study (Observation and Classroom Learning and Evaluation) which took place from 1975 to 1980, followed by "Son of ORACLE", have had an enormous influence on primary education. This book focuses on the issue of transfer from the primary to the secondary school, using data from ORACLE.
Very Good

Transfer from the Primary Classroom Summary

Transfer from the Primary Classroom: 20 Years On by Maurice Galton

The ORACLE (Observation and Classroom Learning and Evaluation) and its follow-up study address the following questions:
Has teaching in the primary school changed over the past twenty years?
Has pupil performance improved or declined?
Are the links between certain teacher approaches and pupil achievement still the same?
Has the National Curriculum had any important consequences for the way in which transfer is conducted?
One of the main claims of the National Curriculum is that it has provided greater continuity through the various stages and this should be reflected in smoother transition from one school to the next. This book focuses on the issue of transfer from the primary to the secondary school, using data from the ORACLE project.
This study which took place from 1975 to 1980, followed by 'Son of ORACLE', the study of group-work in the primary classroom 1980 to 1983, has had an enormous influence on the debate on primary education. The studies described in detail what took place in primary classrooms, the teaching styles used by teachers and the responses made by pupils. It linked these processes to pupil performance. Finally, it followed the pupils as they transferred out of the primary school into the secondary phase of education.
At present a new research project is being carried out in Leicester. It involves studying primary schools for one year and then following the children as they transfer to the secondary phase or to a middle school. The project involves two thirds of the schools used in the original ORACLE research. In addition, the same observation instruments and the same tests, modified for cultural differences, are being used.

Transfer from the Primary Classroom Reviews

Maurice Galton, Linda Hargreaves and Tony Pell are all in the Faculty of Education at Cambridge University. Chris Comber and Debbie Wall are at the University of Leicester. They are the authors of Inside the Primary Classroom: 20 Years On.

1. Transfer and Transition 2. 'Getting Used to Each Other': Cross Phase Liaison and Induction 3. Moving Up to Big School: The First Few Days 4. Teaching in the Transfer Schools 5. The Consequences of Transfer for Pupils: Attitudes and Attainment 6. Patterns of Pupil Behaviour in The Transfer Schools 7. Transfer: A Future Agenda

GOR001712705
Transfer from the Primary Classroom: 20 Years On by Maurice Galton
Maurice Galton
Used - Very Good
Paperback
Taylor & Francis Ltd
2001-11-15
232
0415170222
9780415170222
N/A
Book picture is for illustrative purposes only, actual binding, cover or edition may vary.
This is a used book - there is no escaping the fact it has been read by someone else and it will show signs of wear and previous use. Overall we expect it to be in very good condition, but if you are not entirely satisfied please get in touch with us.