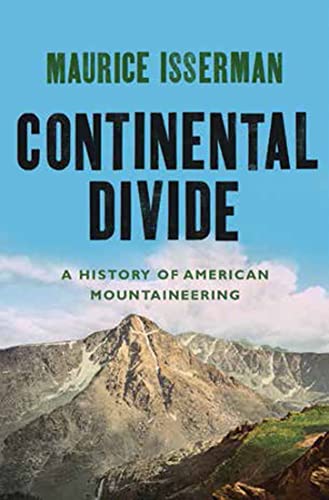 In Continental Divide, Maurice Isserman tells the history of American mountaineering through four centuries of landmark climbs and first ascents. Mountains were originally seen as obstacles to civilization; over time they came to be viewed as places of redemption and renewal. The White Mountains stirred the transcendentalists; the Rockies and Sierras pulled explorers westward toward Manifest Destiny; Yosemite inspired the early environmental conservationists.

Climbing began in North America as a pursuit for lone eccentrics but grew to become a mass-participation sport. Beginning with Darby Field in 1642, the first person to climb a mountain in North America, Isserman describes the exploration and first ascents of the major American mountain ranges, from the Appalachians to Alaska. He also profiles the most important American mountaineers, including such figures as John C. Fremont, John Muir, Annie Peck, Bradford Washburn, Charlie Houston, and Bob Bates, relating their exploits both at home and abroad.

Isserman traces the evolving social, cultural, and political roles mountains played in shaping the country. He describes how American mountaineers forged a "brotherhood of the rope," modeled on America's unique democratic self-image that characterized climbing in the years leading up to and immediately following World War II. And he underscores the impact of the postwar "rucksack revolution," including the advances in technique and style made by pioneering "dirtbag" rock climbers.

A magnificent, deeply researched history, Continental Divide tells a story of adventure and aspiration in the high peaks that makes a vivid case for the importance of mountains to American national identity.

"Maurice Isserman is the hidden jewel of mountaineering historians. He brings a scholar's eye to the wonder and passion of the sport. Continental Divide is a sweeping chronicle of what America contributed to an adventure long dominated by the Swiss and the British, the French, Poles, Germans, Austrians, and Italians...This is a story of mountains as dreams, of land as destiny, of summits as the pinnacles of all human desire." -- Wade Davis, National Geographic "Explorer for the Millennium" and author of Into the Silence
"Maurice Isserman-scholar and historian, engaging storyteller, and a climber of mountains to boot-has produced a gem. Continental Divide is the story of climbing by Americans, both in North America and in the great ranges of other continents. For me, what takes this story from good to great is that it is told within the frame of the history of our country as it has unfolded from 1642 to the 'Golden Age of Mountaineering' in the twentieth century." -- Tom Hornbein, co-pioneer of Everest's West Ridge
"Continental Divide represents over 300 years of American climbing history in one epic volume...Maurice Isserman takes us on this journey with equal amounts of meticulously researched facts and understated humor, critical historical context and heartbreaking human stories-all of which make for a fascinating read." -- Bernadette McDonald, author of Freedom Climbers and Brotherhood of the Rope
"A thrilling and nuanced history that expands our view of exploration, revealing how mountain adventures have transformed America." -- Peter Zuckerman and Amanda Padoan, authors of Buried in the Sky

Maurice Isserman is the author of Continental Divide and coauthor of Fallen Giants, a history of Himalayan mountaineering that won the Banff Prize for best mountaineering history, as well as the National Outdoor Book Award. He is a professor of history at Hamilton College in Clinton, New York.

GOR009713434
Continental Divide: A History of American Mountaineering by Maurice Isserman (Hamilton College)
Maurice Isserman (Hamilton College)
Used - Very Good
Hardback
WW Norton & Co
2016-04-25
448
0393068501
9780393068504
N/A
Book picture is for illustrative purposes only, actual binding, cover or edition may vary.
This is a used book - there is no escaping the fact it has been read by someone else and it will show signs of wear and previous use. Overall we expect it to be in very good condition, but if you are not entirely satisfied please get in touch with us.