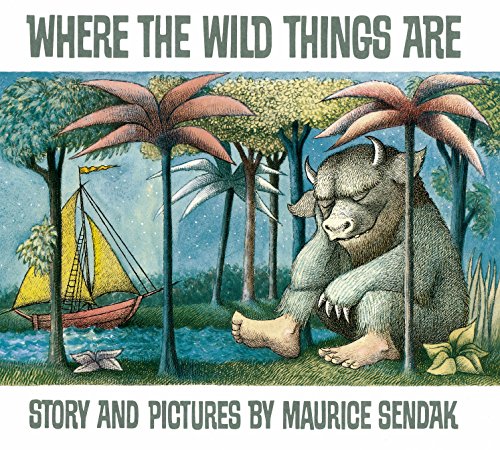 Where The Wild Things Are
by Maurice Sendak

Where The Wild Things Are Summary

Where The Wild Things Are by Maurice Sendak

But Max tames the wild things and is made their king.

Will he ever want to go home?

Where The Wild Things Are Reviews

Sendak is the daddy of them all when it comes to picture books - the words, the rhythm and the design are all wonderful. * S Magazine, Sunday Express *
The greatest picture book ever written -- Chris Riddell, Children's Laureate * Guardian *
Gripping, ingenious and uplifting . . . a shrewd, fierce, healing book -- Boyd Tonkin * Independent *
A timeless masterpiece. The illustrations, the fabulous monsters, the beautiful cross-hatching, and the surreal, dreamlike narrative beckons the reader to join the adventure. The themes are perfect for inspiring discussion on confronting life's scary things, mastering your fears and being brave, letting off steam, saying goodbye, and the comfort of returning home safe and sound * Child Education *
An almost-perfect picture book stuffed with mischief, magic and meaning . . . Has a haunting depth that makes bedtime reading thrilling, a little scary, but also empowering * Junior *

Maurice Sendak was born in Brooklyn, New York. He began by illustrating other authors' books for children, but the first book that he both wrote and illustrated was Kenny's Window, published in 1956. In his lifetime, he illustrated over 80 books, and received many awards, including the 1964 Caldecott Medal for Where the Wild Things Are. In 1970 he was the first American to win the Hans Christian Andersen Illustrator's Medal. He passed away in May 2012.

GOR001327460
Where The Wild Things Are by Maurice Sendak
Maurice Sendak
Used - Very Good
Hardback
Vintage Publishing
1967-01-01
48
0370007727
9780370007724
N/A
Book picture is for illustrative purposes only, actual binding, cover or edition may vary.
This is a used book - there is no escaping the fact it has been read by someone else and it will show signs of wear and previous use. Overall we expect it to be in very good condition, but if you are not entirely satisfied please get in touch with us.