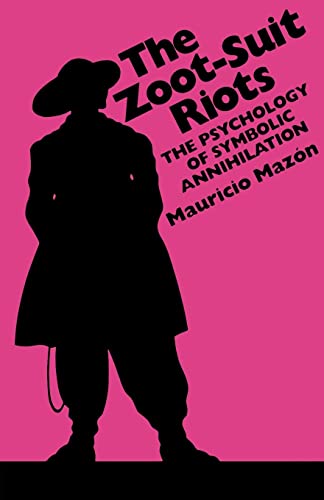 The Zoot-Suit Riots
by Mauricio Mazon

The Zoot-Suit Riots: The Psychology of Symbolic Annihilation by Mauricio Mazon

Los Angeles, the summer of 1943. For ten days in June, Anglo servicemen and civilians clashed in the streets of the city with young Mexican Americans whose fingertip coats and pegged, draped trousers announced their rebellion. At their height, the riots involved several thousand men and women, fighting with fists, rocks, sticks, and sometimes knives. In the end none were killed, few were seriously injured, and property damage was slight and yet, even today, the zoot-suit riots are remembered and hold emotional and symbolic significance for Mexican Americans and Anglos alike.

The causes of the rioting were complex, as Mazon demonstrates in this illuminating analysis of their psychodynamics. Based in part on previously undisclosed FBI and military records, this engrossing study goes beyond sensational headlines and biased memories to provide an understanding of the zoot-suit riots in the context of both Mexican American and Anglo social history.

"In the nascent field of Chicano history psychohistorical studies are not abundant. Thus Mazon makes an immense contribution to the study of the Mexican American." * American Historical Review *

GOR006256169
The Zoot-Suit Riots: The Psychology of Symbolic Annihilation by Mauricio Mazon
Mauricio Mazon
CMAS Mexican American Monograph
Used - Very Good
Paperback
University of Texas Press
1987-11-30
179
0292798032
9780292798038
N/A
Book picture is for illustrative purposes only, actual binding, cover or edition may vary.
This is a used book - there is no escaping the fact it has been read by someone else and it will show signs of wear and previous use. Overall we expect it to be in very good condition, but if you are not entirely satisfied please get in touch with us.