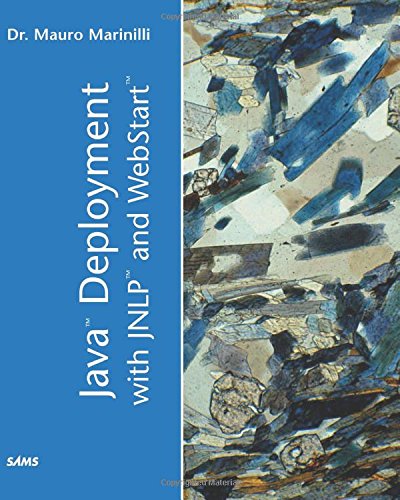 Java Deployment with JNLP and WebStart
by Mauro Marinilli

In Stock
$12.99
+10% GST
JNLP corrects many of the difficulties and limitations previously associated with Java applets and applications. This text is a guide and reference for the JNLP technology and its implementations.
Very Good
Only 1 left

Java Deployment with JNLP and WebStart by Mauro Marinilli

Mauro Marinilli got his first computer (a pioneering Commodore VIC20) when he was 12. He began publishing computer technical articles for an Italian specialized magazine some years later, where he remained a popular columnist until the 8-bit, listings-driven era was finished. In 1999, some months before graduating as a Computer Engineer from the University of Rome's "La Sapienza," he started to work full-time as a Java developer. During that period, he presented at many conferences worldwide (the last so far was at Trento AH 2000, with Mona Laroussi). After several projects, both in the industry and for research, he joined a mid-sized Italian software firm, Datamat, as the chief Java developer responsible for the GUI team developing the new meteorological software system used by the Italian Air Force. At the beginning of 2001, he transformed his long-standing hobby into full-time work as a freelance author specializing in Java programming.

He collaborates with the University of Rome 3 and other research organizations. His research interests are Intelligent Information Filtering, Information Retrieval, Human-Computer Interaction, and Adaptive Hypermedia, with papers published on conference proceedings and specialized reviews. He is the author of several Java articles at Gamelan.com and contributes to several open-source projects.

Marinilli grew up and currently lives by the sea (he couldn't live anywhere else), where he enjoys all seaside sports, sailing, scuba-diving, canoeing, and simply beach jogging; and when away from a desktop, he enjoys the warmth of his friends.

1. Deploying Java.
The Java Runtime Environment. Old Solutions. A Perspective Change. A General Definition of Software Deployment.2. An Abstract Model For Deployment.
An Introduction to the Model. The Actors In the Model. Discussing the Model. Summary.3. Existing Solutions.
Introduction. JNLP Implementations. Commercial Solutions.

GOR003202166
Java Deployment with JNLP and WebStart by Mauro Marinilli
Mauro Marinilli
Used - Very Good
Paperback
Pearson Education (US)
2001-09-19
512
0672321823
9780672321825
N/A
Book picture is for illustrative purposes only, actual binding, cover or edition may vary.
This is a used book - there is no escaping the fact it has been read by someone else and it will show signs of wear and previous use. Overall we expect it to be in very good condition, but if you are not entirely satisfied please get in touch with us.