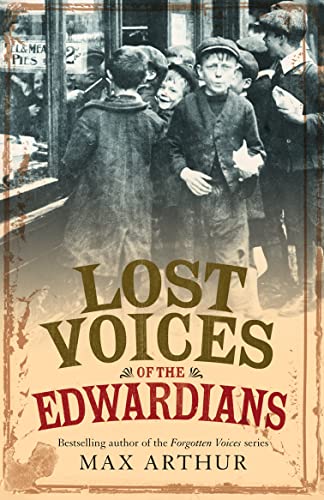 Lost Voices of the Edwardians
by Max Arthur

Lost Voices of the Edwardians Summary

The Edwardian era is often eclipsed in the popular imagination by the Victorian age that preceded it and World War I that followed. In this wonderful work, Max Arthur redresses this imbalance, combining oral history and images from the rediscovered Edwardian Mitchell and Kenyon film footage to give voice to the forgotten figures who peopled the cities, factories and seasides of Britain.

This extraordinary period was fuelled by a relentless sense of progress and witnessed the invention of many of the technologies we now take for granted. The extremes of this upstairs-downstairs world prompted a huge upsurge in political activity, and the Edwardian age saw the rise of socialism and the emergence of the suffragette movement. These years are made all the more poignant by our knowledge that World War I was imminent and this time of optimistic development would be brutally cut short.

This exciting work draws together the experiences of people from all walks of life, capturing the first generation that were able to record their lives on film and imbuing them with an emotional immediacy.

Lost Voices of the Edwardians Reviews

`The words are as fresh as if they were written yesterday...extraordinary.' Deborah Moggach

`What emerges from these hundreds of forgotten voices is not change but continuity - the essence of a national character which survived two world wars and survives today.' Daily Mail

`Another of Max Arthur's splendid oral histories, giving the undiluted voices literally of princes and paupers...this is a rich and informative read.' BBC History Magazine

`Max Arthur is a researcher with a huge appetite for the almost forgotten..."Lost Voices" penetrates to the core of Edwardian Life - a marvellous evocation of a neglected era.' Oxford Times

GOR001710606
Lost Voices of the Edwardians: 1901-1910 in Their Own Words by Max Arthur
Max Arthur
Used - Very Good
Paperback
HarperCollins Publishers
2007-04-02
320
0007216149
9780007216147
N/A
Book picture is for illustrative purposes only, actual binding, cover or edition may vary.
This is a used book - there is no escaping the fact it has been read by someone else and it will show signs of wear and previous use. Overall we expect it to be in very good condition, but if you are not entirely satisfied please get in touch with us.