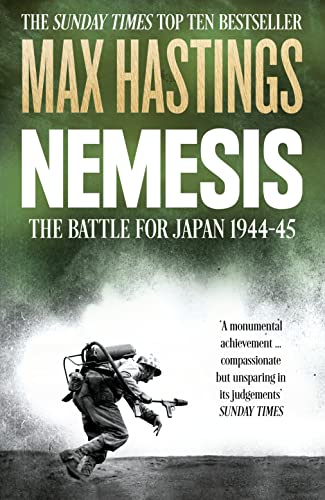 A companion volume to his bestselling `Armageddon', Max Hastings' account of the battle for Japan is a masterful military history.

A companion volume to his bestselling `Armageddon', Max Hastings' account of the battle for Japan is a masterful military history.

Featuring the most remarkable cast of commanders the world has ever seen, the dramatic battle for Japan of 1944-45 was acted out across the vast stage of Asia: Imphal and Kohima, Leyte Gulf and Iwo Jima, Okinawa and the Soviet assault on Manchuria.

In this gripping narrative, Max Hastings weaves together the complex strands of an epic war, exploring the military tactics behind some of the most triumphant and most horrific scenes of the twentieth century. The result is a masterpiece that balances the story of command decisions, rivalries and follies with the experiences of soldiers, sailors and airmen of all sides as only Max Hastings can.

`A monumental achievement...compassionate but unsparing in its judgements.' Sunday Times

`An outstandingly gripping and authoritative account of the battle for Japan, and a monument to human bravery and savagery.' Daily Telegraph

`Magisterial...it is truly cathartic to reach the end of the Second World War in Hastings's company.' The Times

`Brilliantly though Hastings lays out the strategic context, his real talent lies in his account of the "terrible human experience" that it involved...This is a book for anyone who wants to understand what happened in half the world during one of the bloodiest periods of the blood-soaked 20th century.' Spectator

`Spectacular...Hastings makes important points about the war in the East that have been all too rarely heard...excellent...compelling...searingly powerful.' Sunday Telegraph

`As Hastings brilliantly describes, conditions for fighting men on both sides were appalling...the fire-bombing of Tokyo and the decision to drop the atomic bombs were influenced by the urge to 'get this business over with', but the argument, as Hastings explains so well with his usual exemplary judgement, is far more complex.' Financial Times

GOR001363696
Nemesis: The Battle for Japan, 1944-45 by Max Hastings
Max Hastings
Used - Very Good
Paperback
HarperCollins Publishers
2008-10-01
704
0007219814
9780007219810
N/A
Book picture is for illustrative purposes only, actual binding, cover or edition may vary.
This is a used book - there is no escaping the fact it has been read by someone else and it will show signs of wear and previous use. Overall we expect it to be in very good condition, but if you are not entirely satisfied please get in touch with us.