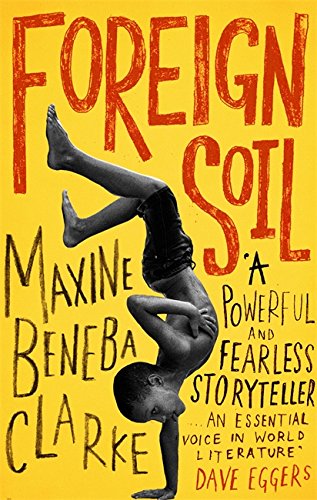 Used Price
$20.49
inc. GST
Free Shipping in Australia
In this collection of award-winning stories, Melbourne writer Maxine Beneba Clarke has given a voice to the disenfranchised, the lost, the downtrodden and the mistreated. It will challenge you, it will have you by the heartstrings. This is contemporary fiction at its finest.
Reviews:
Trustpilot
Very Good

'Foreign Soil will stay with you with the force of elemental truth. Clarke is the real deal' Dave Eggers

In this collection of award-winning stories, Melbourne writer Maxine Beneba Clarke has given a voice to the disenfranchised, the lost, the downtrodden and the mistreated. It will challenge you, it will have you by the heartstrings. This is contemporary fiction at its finest.

In Melbourne's western suburbs, in a dilapidated block of flats overhanging the rattling Footscray train lines, a young black mother is working on a collection of stories.

The book is called Foreign Soil. Inside its covers, a desperate asylum seeker is pacing the hallways of Sydney's notorious Villawood detention centre, a seven-year-old Sudanese boy has found solace in a patchwork bike, an enraged black militant is on the warpath through the rebel squats of 1960s Brixton, a Mississippi housewife decides to make the ultimate sacrifice to save her son from small-town ignorance, a young woman leaves rural Jamaica in search of her destiny, and a Sydney schoolgirl loses her way.

A phenomenal achievement . . . Clarke writes with both fists raised. * Mslexia *

Maxine Beneba Clarke is an Australian writer and slam poetry champion of Afro-Caribbean descent. She is the award-winning author of the poetry collections Gil Scott Heron is on Parole and Nothing Here Needs Fixing. Her debut short fiction collection Foreign Soil won the Victorian Premier's Award Unpublished Manuscript Award (2013), the Indie Book Award for Debut Fiction (2015) and the Australian Book Industry Award for Literary Fiction Book of The Year (2015). Foreign Soil was also shortlisted for the Stella Prize for Australian Women's writing (2015). Corsair will publish her memoir The Hate Race in 2016.

GOR008230187
Foreign Soil by Maxine Beneba Clarke
Maxine Beneba Clarke
Used - Very Good
Paperback
Little, Brown Book Group
2017-03-09
304
147215147X
9781472151476
N/A
Book picture is for illustrative purposes only, actual binding, cover or edition may vary.
This is a used book - there is no escaping the fact it has been read by someone else and it will show signs of wear and previous use. Overall we expect it to be in very good condition, but if you are not entirely satisfied please get in touch with us.